Filmmaker Rakeysh Omprakash Mehra, who has directed the Farhan Akhtar-starrer boxing drama Toofan, says it was challenging to shoot at real location like Dongri and Nagpada in the city. 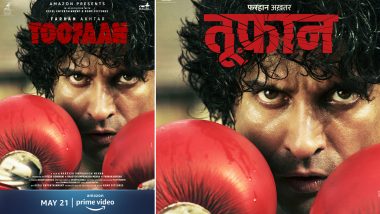 Filmmaker Rakeysh Omprakash Mehra, who has directed the Farhan Akhtar-starrer boxing drama Toofan, says it was challenging to shoot at real location like Dongri and Nagpada in the city. However, he adds this was a challenge "worth exploring". "The script demanded some very real and raw locations and it was most definitely not an easy job. We got into it knowing the challenges, but those that were definitely worth exploring," he says. Toofan: Farhan Akhtar Shares New Poster of His Upcoming Boxing Movie, Thanks Fans for Tremendous Response to Film’s Teaser

"We shot in Dongri and Nagpada for about a month. The residents in the area were extremely accommodating and lovely to work with. Overall, it was a demanding yet pleasant experience," Mehra said. The story of the film revolves around the relationship shared between a goon from the streets of Dongri and a middle class doctor, set against the backdrop of boxing. Don 3: Shah Rukh Khan’s Fans Make The Movie Trend After The Actor Tweets About Farhan Akhtar’s Toofan.

"Toofan" features Farhan Akhtar, Mrunal Thakur and Paresh Rawal. The film has been produced by Ritesh Sidhwani, Farhan Akhtar and Mehra. Farhan is being directed by Rakeysh Mehra for the second time. They worked together in the film "Bhaag Milkha Bhaag" in 2013. Toofan is scheduled for a May 21 premiere on Amazon Prime Video.

(The above story first appeared on LatestLY on Mar 23, 2021 02:58 PM IST. For more news and updates on politics, world, sports, entertainment and lifestyle, log on to our website latestly.com).