A few days after Bollywood star announced his Kriti Sanon co-starrer horror comedy 'Bhediya', Bollywood star Varun Dhawan on Wednesday proved to his fans that he is working hard for the film and shared a clip howling just like a wolf 'Bhediya'. 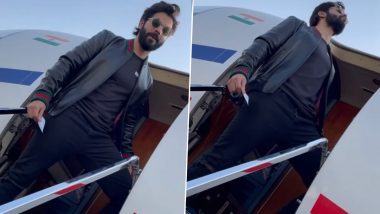 A few days after Bollywood star announced his horror comedy 'Bhediya' with Kriti Sanon as co-lead, Bollywood star Varun Dhawan on Wednesday revealed that he is working hard for the film and shared a clip howling like a werewolf. The Student Of The Year star took to Instagram to post a video in which he is seen howling just like a wolf as he is about to board his private jet. Bhediya: Varun Dhawan and Kriti Sanon in Amar Kaushik’s Horror-Comedy, Film To Release on April 14 2022!

In the video, Dhawan is sporting a casual look as he donned a back T-shirt and a leather jacket, and a pair of denim. He accessorised his look with a pair of sunglasses and looked handsome as he sports a full-grown beard. The video showcased Varun, as he listens to the person holding the camera counting 1, 2 and as soon as he says go, the 'Kalank' star starts howling as he looks high up in the sky and smile afterwards. Rajkummar Rao’s Roohi to Varun Dhawan’s Bhediya, Bollywood’s Upcoming Horror Flicks With Blend of Comedy, Romance, Mythology and More.

Taking to the captions, he wrote, "Woooo (a wolf emoticon) #BHEDIYA."

Celebrity followers including Lara Dutta Bhupathi and more than 2 lakh followers liked the post, while many chimed into the comments section.

This horror-comedy drama will mark the 'Badlapur' star and 'Heropanti' star's third collaboration with each other after sharing screen spaces in 2015 rom-com 'Dilwale' and 2019 'Kalank'. 'Bhediya' will bring together the dynamic duo of producer Dinesh Vijan and director Amar Kaushik, who also helmed the 2018 blockbuster movie 'Stree'. Starring Kriti Sanon, Varun Dhawan, Abhishek Banerjee, and Deepak Dobriyal, the story is written by National Award Winner, Niren Bhatt who also wrote intriguing scripts for 'Bala', 'Made In China', 'Wrong Side Raju'.