Vicky Kaushal Dating Katrina Kaif? Here's What a Friend has to Say about their New Relationship 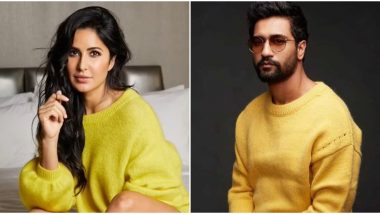 Vicky Kaushal and Katrina Kaif are the newest lovebirds in the tinsel town, aren't they? Well, at least that's what the industry is buzzing about and their frequent pictures together only add fuel to this fire. Though the couple is being extremely cautious about their outings and showing no signs of 'affection' whatsoever, those close to the couple insist that there's something brewing between them. A budding romance you can say. If a close friend of the Raazi actor is to believe, the duo is still getting to know each other. So there's nothing to define or be excited about. Shah Rukh Khan, Katrina Kaif, Vicky Kaushal and Others Make a Stylish Appearance at Ali Abbas Zafar’s Birthday Bash (View Pics).

In Rajeev Masand's new column in the Open Magazine, the writer quoted a source saying, "They like hanging out but they don’t get a lot of time given that both have busy schedules. But it’s very early for them to declare anything. It’s very new and they’re still seeing where it goes." Well, we must admit they do look amazing together and given that they both are single currently, there's no harm in exploring each other's company and see if things eventually work out in their favour. Vicky Kaushal and Katrina Kaif Spark Off Dating Rumours, Spotted Leaving A Mutual Friend’s Diwali Party Together.

Meanwhile, there are also reports about Karan Johar offering them a new project together. However, it's too early to talk about it and currently, they are busy enjoying this new tale. While Katrina is single since her breakup with Ranbir Kapoor in 2016, Vicky recently parted ways with Harleen Sethi. But guess, they are ready to move on and ditch their single status once again.

(The above story first appeared on LatestLY on Jan 24, 2020 03:49 PM IST. For more news and updates on politics, world, sports, entertainment and lifestyle, log on to our website latestly.com).