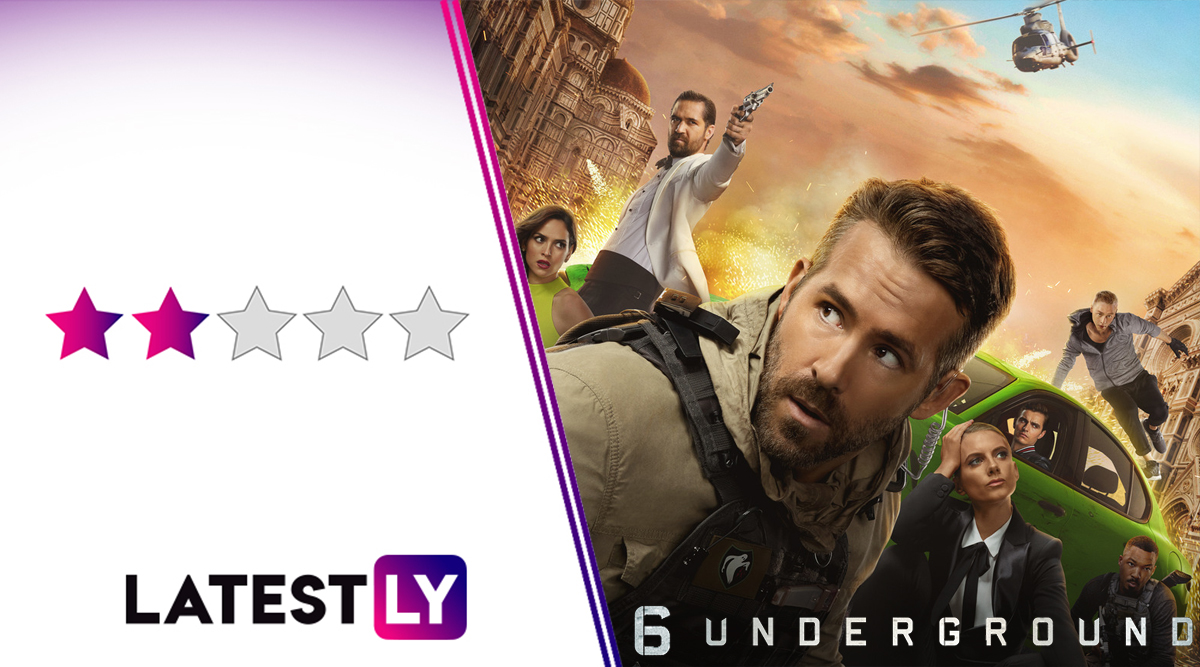 6 Underground Movie Review: Michael Bay who is better known for directing the Transformers franchise has a new offering and that's the Netflix release 6 Underground, headlined by a very Deadpool-like-speaking Ryan Reynolds. The film from what reports suggest is a $150 million action thriller that somehow made it to the streaming platform instead of enjoying a full-fledged theatrical release. Bay doesn't give you much time to settle into this one as it takes off with jets flying, car chases, gunfire and blood squirting out of one of the lead characters. I won't say he successfully hooks us in but sure does grab our attention as we try to grasp what's going on.  Ryan Reynolds Deadpool Co-Star TJ Miller Doesn’t Want Disney to Make Deadpool 3, Here’s Why!

The film stars Reynolds as 1, an anonymous billionaire who joins a vigilante group to overthrow the regime in a Central Asian country called Turgistan. The film's first fifteen minutes are a long car chase along the cobbled streets of Italy where even the statue of David is saved by an inch, dogs are a second away from being run-over and so on. In this chase, we keep getting introduced to the rest of the team. Each of the anonymous six is only known by a number– hence 6 Underground which includes  Mélanie Laurent, Manuel Garcia-Rulfo, Adria Arjona, Corey Hawkins, Ben Hardy and Dave Franco. I won't even bother telling you about their backstories but there's hardly any redeeming quality in any of them. There's little efforts taken to build these characters up.

Even as Bay constantly shows off the huge scale of the film with the action sequences, there's a clear understanding from the beginning that all this is built on a wafer-thin plot. One would expect the usual Ryan Reynolds banter to help keep this thin plot afloat but that doesn't happen. There's enough globe-trotting that the vigilante team does but none of it is worked out with specific clarity for the viewers. There are some unnecessary elements added such as the secret base from where the team operates having the sign read, “Keep the fuck out" like that wouldn't grab any attention. The film is also laden with product placements that are poorly done as Captain Morgan, Heineken, Red Bull are shoved in our faces deliberately. Joker Beats Deadpool 2 to be the Highest Grossing R- Rated Movie of all Time and Ryan Reynolds has his Own Way of Congratulating his Successor.

The scenes that do make an impact are the ones that show Turgistan as we are shown children clutching the bodies of their lost family members in a ravaged town. The explosions are deafening and in some ways, it seems Bay is trying hard to convince us that the only way to overthrow a regime is by indulging in guns. It seems like yet another film in the list of many that try to justify American 'interventionism' when it comes to war-torn countries. Bay even uses the intimate scenes as a desperate ploy to satiate the audiences looking for the classic action-erotica combo but they seem misplaced.  Basically, 6 Underground is ambitious when it comes to its action with some incredible moments such as one scene involving a crane. There's extensive use of slow-motion, probably in evey alternate frame and it just gets tiring, making this two-hour film feel even longer than it seems.