Alex Rodriguez is getting 'upset' and 'shocked' after the reunion of her ex-fiance Jennifer Lopez with her wasband Ben Affleck. The Hustlers actor Jennifer and Ben began dating in July 2002 while filming the famous box office bomb Gigli. 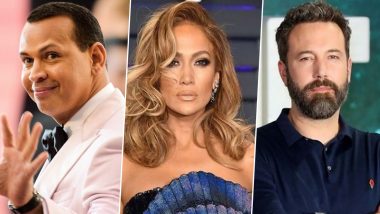 A source close to Lopez told E! News that Alex is 'flabbergasted' more than anything else, especially since they officially broke up and called off their engagement just a month ago. "A-Rod is shocked that J.Lo has moved on. He truly thought they would be able to make it work and reconnect. He has been reaching out to J.Lo trying to meet with her and she has been very short with him," the source revealed. Ben Affleck and Jennifer Lopez Spark Rumours of Hanging Out After Alex Rodriguez Split.

According to the source, Alex is "saddened" about Lopez's reunion with Ben, so much so that he has reached out to her to let her know "he is upset."However, summing it up the insider told, "She is not interested in rekindling anything with A-Rod and is done". The news of Bennifer's reunion came about a month after Lopez and Alex split after four years together. Days later, she and A-Rod reunited briefly in L.A. in late April and a source told the outlet that he wanted to "work things out" with her. However, Ben was then spotted at her home in the city. At the time, another source said they were "just friends."

However, the pair soon realised their chemistry cannot be denied. As per E! News, the 'Hustlers' actor Jennifer and Ben began dating in July 2002 while filming the famous box office bomb 'Gigli'. The actor proposed that November with a 6.1-carat pink solitaire custom-made Harry Winston diamond ring. However, just days before their September 2003 vows, the couple, deemed "Bennifer" by fans, called off their Santa Barbara, California wedding. Months later, in January 2004, they confirmed they had officially split. In 2014, Jennifer said on the 'Today' show her and Ben's breakup was probably her "first big heartbreak."