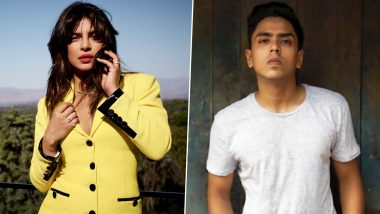 The White Tiger starring Adarsh Gourav, Rajkummar Rao and Priyanka Chopra Jonas was released in January 2021 on Netflix. The movie was gripping in its own way and that became the USP about it. The story of how a driver rises to the extreme from nowhere caught the moviegoers attention and even the critics were in awe. Now, Adarsh Gourav has been nominated for TWT in the Best Actor category for BAFTA 2021. Yus, you read that right! And well, PeeCee has reacted to this amazing news on social media. BAFTA 2021: Adarsh Gourav Gets Nominated for The White Tiger.

The actress took to her micro-blogging site and expressed how proud a moment for India it is, as The White Tiger has received two nominations at the prestigious awards. While she tagged Adarsh as 'deserving', she also congratulated the filmmaker Ramin Bahrani for the adapted screenplay nod. Priyanka, who was one of the executive producers for the film seemed ecstatic with the BAFTA nominations. BAFTA 2021: Chadwick Boseman, Adarsh Gourav, Frances McDormand Bag Nominations, Check Out the Complete List of Nominees.

I feel extremely proud to have been an executive producer on this movie! Let’s get it!!#TheWhiteTiger @_GouravAdarsh @RajkummarRao #RaminBahrani@mukuldeora @netflix

FYI, Adarsh is competing in the Best Actor category alongside Riz Ahmed (Sound Of Metal), Anthony Hopkins (The Father) the late Chadwick Boseman (Ma Rainey's Black Bottom), Mads Mikkelsen (Another Round) and Tahar Rahim (The Mauritanian).

Also, after the announcement of BAFTA 2021 nominations, Adarsh in a conversation with PTI said, “This is unbelievable. It is surreal... I was at the gym. I just found out about the nomination.” “I saw my phone and there were a lot of messages on The White Tiger WhatsApp group and Pooja Gupte, the DOP called me. This is so unexpected and overwhelming," he added. Congratulations to the team. Stay tuned!

(The above story first appeared on LatestLY on Mar 10, 2021 08:47 AM IST. For more news and updates on politics, world, sports, entertainment and lifestyle, log on to our website latestly.com).