The report also suggests that Spidey will have to go up against Captain Marvel in her film. Captain Marvel will continue to think that Spider-Man is the bad guy and will give him a chase in order to bring him to justice. 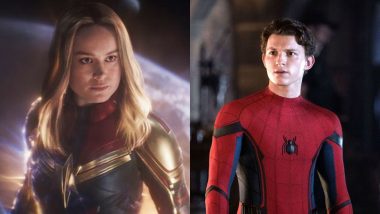 By now, it should be common knowledge that Peter Parker (Tom Holland) was exposed to be Spiderman during the mid-credits scene of Spider-Man: Far From Home. The antagonist Mysterio (Jake Gyllenhal) edited footage, got it published for the world and made it look like the friendly neighbourhood web-slinger is the villain. Whowza. We will see what happens about that in the upcoming MCU movie, Spiderman 3 rumoured to be subtitled Home Run. But, now a new report by We Got This Covered suggests that the saga will continue until Captain Marvel 2. Yes, Spiderman will continue on the path to clear his name until the sequel adventures of Carol Danvers (Brie Larson).

The report also suggests that Spidey will have to go up against Captain Marvel in her film. Captain Marvel will continue to think that Spider-Man is the bad guy and will give him a chase in order to bring him to justice.

It is popular that Captain Marvel is the most powerful Avenger of all. So, it will be interesting to Spider-Man go up against her. He is also powerful but maybe not as powerful as Captain Marvel. If you remember, Captain Marvel had to come to Spiderman's rescue in the epic climax of Avengers: Endgame. Of course, she "got help" from other female members of the team.

After a brief exit from Disney, Spiderman - whose rights belong with Sony - was back on board for one more standalone film. The sequel in 'Home' series. Plus two more projects. Now, as per rumours, Marvel is looking to extend the contract to 6 more future movies.

The production on ALL MCU projects seems to be delayed now. The release of The Falcon and The Winter Soldier web-series is delayed from August 2020 as shooting is remaining. Similarly, post-production of WandVision is also delayed, although principal photography is complete. This means Doctor Strange 2 is also delayed, which will further topple the dominoes of the subsequent releases.

(The above story first appeared on LatestLY on Jul 18, 2020 07:42 PM IST. For more news and updates on politics, world, sports, entertainment and lifestyle, log on to our website latestly.com).