The movie also earned a seven-minute standing ovation, suggesting that it could be the most polarising title to debut at this year's Cannes, reports Variety. 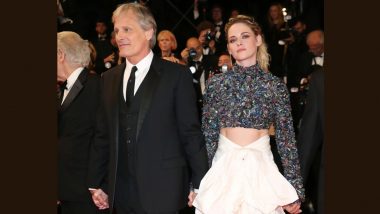 In David Cronenberg's Crimes of the Future, characters can feel no pain. Unfortunately, the same wasn't true for the dozens of attendees at the Cannes premiere of the horror drama that walked out midway through the film, unable to stomach just exactly what was happening on screen. The movie also earned a seven-minute standing ovation, suggesting that it could be the most polarising title to debut at this year's Cannes, reports Variety. Sultry Deepika Padukone Shimmers in Feather-like Black Gown on Day 6 of Cannes 2022.

The film reunites Cronenberg with Viggo Mortensen alongisde Kristen Stewart and Lea Seydoux. It also finds Cronenberg back in his science-fiction/horror mode for the first time since 1999's 'Existenz'. Crimes of the Future may not win the Palme d'Or, but it would land a prize for the weirdest movie of the festival. Mortensen plays a performance artist who has his organs operated on in some pseudo-sexual ritual in this dystopian universe. Cannes 2022: Black Was the Colour of This Season; Check out Deepika Padukone, Hina Khan & Others in Their Hot Avatars.

Stewart plays an employee at the transplant center, who in one scene says to him: Surgery is the new sex. The film includes a gory child autopsy scene, shots of bloody intestines and characters who orgasm by licking each other's open wounds. There's also a chair shaped like an oblong human spine that rotates at grotesque angles. "I'm very touched by your response," Cronenberg said after the ovation.

"I hope you're not kidding, I hope you mean it." In a separate press screening for the film, critics largely stayed put for the duration of the film, with only five people leaving the theater. Though 'Crimes of the Future' released a smattering of applause upon its ending, it wasn't exactly enthusiastic. Cronenberg has a rollercoaster history with the Cannes Film Festival. He dropped a bomb on the festival in 1996 with the premiere of 'Crash', starring James Spader as a film producer who becomes involved with a group of people who turn to car crashes in order to get sexually aroused.

Cannes viewers booed the film and stormed out of the theater, and even jury president Francis Ford Coppola said that some jurors "abstained very passionately" to the decision to award 'Crash' a special jury prize. The jury was far more favourable to Cronenberg in 2014 with the premiere of 'Maps to the Stars', which won Julianne Moore the best actress prize.

The official 'Crimes of the Future' synopsis from Neon reads: "As the human species adapts to a synthetic environment, the body undergoes new transformations and mutations. With his partner Caprice (Lea Seydoux), Saul Tenser (Viggo Mortensen), celebrity performance artist, publicly showcases the metamorphosis of his organs in avant-garde performances.

"Timlin (Kristen Stewart), an investigator from the National Organ Registry, obsessively tracks their movements, which is when a mysterious group is revealed Their mission - to use Saul's notoriety to shed light on the next phase of human evolution." Cronenberg made headlines prior to Cannes for predicting festival attendees would walk out of the movie, but he clarified in a Variety interview, "I wasn't saying that everybody will walk out. The audience in Cannes is a very strange audience. It's not a normal audience.

"A lot of people are there just for the prestige or for the red carpet. And they're not cinephiles. They don't know my films. So they might be walkouts, whereas a normal audience would have no problem with the movie. So who knows? But certainly a lot of people walked out when we showed 'Crash.'"

(The above story first appeared on LatestLY on May 24, 2022 01:49 PM IST. For more news and updates on politics, world, sports, entertainment and lifestyle, log on to our website latestly.com).