Dave Prowse, popularly known for essaying the role of Darth Vader in the original Star Wars trilogy passed away at the age of 85. He was also a Bristolian former bodybuilder. He died due to a shirt illness. Read on. 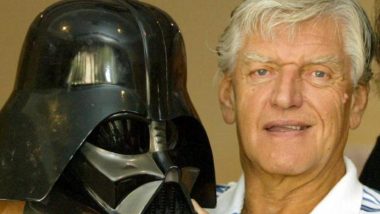 David Prowse, popularly known for essaying the role of Darth Vader in the original Star Wars trilogy passed away at the age of 85. He was also a Bristolian former bodybuilder. Reportedly, this sad news was confirmed by the deceased's agent. “May the force be with him, always!" said Prowse’s agent Thomas Bowington.” Though famous for playing many monsters - for myself, and all who knew Dave and worked with him, he was a hero in our lives,” he added. Mr Bowington also mentioned that the actor died due to a short illness and said, "a truly and deeply heart-wrenching loss for us and millions of fans all over the world.” MasterChef Junior Star Ben Watkins Dies: Celebrity Chef Gordon Ramsay Shares Condolence.

The main reason why Dave got the role of the Vader was because of his strong physique. FYI, his character in the movie was voiced by James Earl Jones. Not just this, his role as Green Cross Road Man which was all about road safety in the UK got him an MBE. David's career as an actor spanned 50 years and he was regarded as one of the most popular faces from the international space. Italian Film Star Daria Nicolodi Dies at 70

It's with great regret and heart-wrenching sadness for us and million of fans around the world, to announce that our client DAVE PROWSE M.B.E. has passed away at the age of 85. #DaveProwse @starwars #DarthVader #GreenCrossCodeMan #iconic #actor #bodybuilder #MBE pic.twitter.com/dL2RmdIqg8

It was in the year 1967 when Prowse made his film debut with James Bond's spoof Casino Royale portraying the role of Frankenstein's Creature. The actor was brought up in Bristol. In 2011, Straight from the Force's Mouth, his autobiography was published and received much love. May his soul rest in peace.

(The above story first appeared on LatestLY on Nov 29, 2020 01:01 PM IST. For more news and updates on politics, world, sports, entertainment and lifestyle, log on to our website latestly.com).