Euphoria Star Angus Cloud Opens Up About the Time He Almost Died, Says ‘I Broke My Skull on Friday the 13th’

Angus Cloud opens up about his terrifying and scary story regarding the scar on his head, after he suffered a broken skull and fingers by falling into a construction pit while walking in the dark. He eventually climbed out himself and managed to make it to his mother's house. He also added that he would've died had she let him go to sleep when he wanted to. 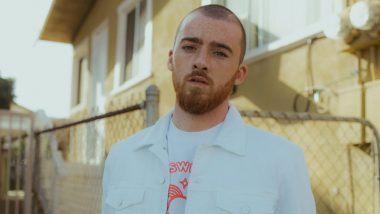 Euphoria actor Angus Cloud shared that he suffered a broken skull and fingers after falling into a construction pit. The Euphoria star shared that the scar on his head is very much real and it came from a serious accident back in 2013, when Angus fell into a construction pit while walking in the dark, reports eonline.com. Euphoria Season 2 Episode 5: Fans React and Praise Zendaya's Performance in Her Acclaimed Drama Series!

"I broke my skull on Friday the 13th," he shared in an August 10 interview with Variety. "I woke up 12 hours later at the bottom. I was trapped."

The 24-year-old said that he suffered a broken skull, internal bleeding and broken fingers from the fall. And after coming to the conclusion that "they wasn't gonna find me down there," Cloud entered "survival mode" and decided to save himself.

"I eventually climbed out after-I don't know how long," he recalled. "It was hella hard to climb out, because my skull was broken, but my skin wasn't, so all the bleeding was internal, pressing up against my brain."

Once he made it out, Angus took a bus to his mom's house. After making his way home and not being able to finish a sentence in front of his mother, Angus pitched that he was gonna go to bed. Thankfully, his mom stopped him.

"I would have died," he noted. "She gave me some water, and I started throwing up hella mouthfulls of crimson red blood." As for the scar's story, the mark came as a result of the life-saving operation at the hospital.

"They cut my head open," he shared. "They put some screws and a plate over where I broke my skull and-s--t, sealed me back up, and that was that." Reflecting on the experience, he said that while "the brain is so fragile," he is "so blessed to just have minor brain damage." Euphoria: Sydney Sweeney Says She Never Felt Uncomfortable With Sex Scenes and Nudity on the Show.

(The above story first appeared on LatestLY on Aug 11, 2022 04:53 PM IST. For more news and updates on politics, world, sports, entertainment and lifestyle, log on to our website latestly.com).