Once Upon A Time in Hollywood First Look: Leonardo DiCaprio - Brad Pitt Make The '60s Sexy Again For Quentin Tarantino's Next

The movie will release in August 2019. 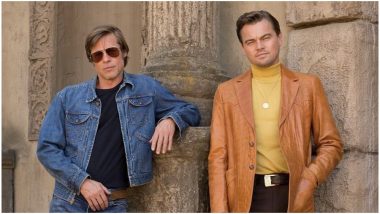 Even though they have been stars in Hollywood for nearly three decades, it is a wonder that heartthrobs Leonardo DiCaprio and Brad Pitt have never worked together. Save for that short film made by Martin Scorsese to promote Asian tourism. But that flaw is now rectified as two of the biggest stars in the world are coming together to play the leads under the direction of one of the most prolific directors of all time, Quentin Tarantino.

Leonardo DiCaprio and Brad Pitt will star in Tarantino's next, titled Once Upon A Time in Hollywood. Based on the infamous Manson murders in the '60s, the movie will be set in that era. So that explains the style statement of both Leo and Pitt in the recently revealed first look that the actors have shared on their Insta page. And we must say that's one dynamic duo Hollywood should have teamed up years ago!

As per reports, DiCaprio is playing television star Rick Dalton and Pitt plays Cliff Booth, his longtime stunt double. This is the second time Leo and Pitt are working with Tarantino on an individual basis. Pitt played an Allied officer in Inglorious Basterds, while DiCaprio delivered an Oscar-nominated villainous turn as a slave-owner in Django Unchained. This is also Leonardo DiCaprio's first film, after that long break he took, winning his first Academy Award for the Best Actor in The Revenant.

(The above story first appeared on LatestLY on Jun 27, 2018 09:20 PM IST. For more news and updates on politics, world, sports, entertainment and lifestyle, log on to our website latestly.com).