Priyanka Chopra and Nick Jonas are Busy Romancing in the City of Love, Paris - Check Out New Pics 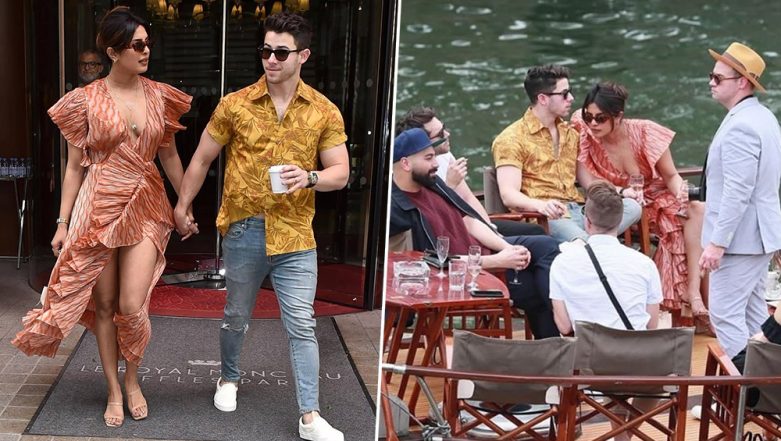 Priyanka Chopra and Nick Jonas are currently holidaying in Paris, France, and their getaway pictures are filling our Instagram feed. After enjoying a brief holiday at the Cannes Film Festival this year, the duo got busy with their individual professional commitments only to plan another elaborate holiday in the city of love, Paris. While Nick took to his Instagram account to share a B/W picture of his with PeeCee, fan clubs are busy gathering the rest and we are thankful to them. Priyanka Chopra Steps Out With Nick Jonas in NYC Looking Gorgeous in a Mini Dress But Her Kneecap Suggests She's Still Not Recovered - See Pics.

Dressed in an orange printed ruffled dress with a plunging neckline and a thigh-high slit, Priyanka looked ravishing and so-damn-hot. The duo can be spotted enjoying a boat ride which we believe was on the river Seine. 'Nickyanka' as their fans like to call them were joined by Joe Jonas and wife, Sophie Turner as the family made the most of their Parisian holiday. Nick Jonas and Kevin Jonas Reveal Juicy Details About Joe Jonas' Wild Bachelor Party That Had the Cops Calling on Them.

Priyanka - Nick with Sophie and Joe

We believe the couple has arrived to celebrate Joe and Sophie's wedding that's happening in less than a week. Earlier there were reports about how the GoT actress wants to have an intimate wedding in the city of Paris, unlike PeeCee-Nick's grand Jodhpur bash. We are expecting some more lovey-dovey pictures from their romantic outing and stay tuned to LatestLY as we keep updating about them.