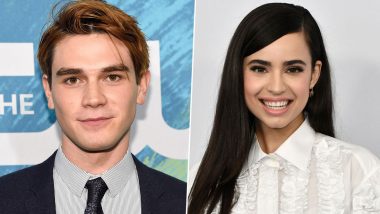 Actors KJ Apa and Sofia Carson have boarded Michael Bay-produced pandemic movie “Songbird”. The actors have joined the ensemble that also features Demi Moore, Bradley Whitford, Craig Robinson, Jenna Ortega, Paul Walter Hauser and Peter Stormare. According to Deadline, the movie is directed by Adam Mason, who also wrote the script with Simon Boyes. Set two years in the future during a pandemic lockdown, “Songbird” focuses on the budding romance between a motorbike courier named Nico (Apa), who has rare immunity, and Sara (Carson), a young artist. Priyanka Chopra Joins Keanu Reeves’ Matrix 4, Will Start Shooting for it in Germany.

“To be with the one he loves, our hero must overcome martial law, murderous vigilantes and a powerful, well-connected family, helmed by a matriarch who will stop at nothing to protect her family and maintain her way of life,” the plotline reads. Moore is playing the matriarch. Man From Toronto: This Is Us Actress Melanie Liburd Joins Kevin Hart, Woody Harrelson Starrer Action-Comedy

“Songbird” is one of the first feature projects to go into production with the lifting of the lockdown and imposition of new safety restrictions. The production was briefly shutdown after SAG-AFTRA issued a “do not work” order on July 2, but rescinded it the next day.