Sean Connery No More! Did You Know Naseeruddin Shah Worked With The Late Actor In His Last Acting Gig, The League Of Extraordinary Gentlemen?

Sean Connery leaves us today for heavenly abode and all we have left are his movies. Did you know he retired in 2003 from acting in movies and his last movie was with Naseeruddin Shah? 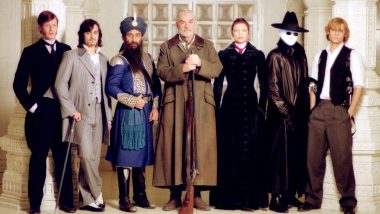 Sean Connery left us bereaved today at the age of 90. For every 007 fans, it's a dark day. There are many who couldn't accept anyone else in that role after he quit being His Majesty's secret agent many years back. Can you blame them? As they say, you can never forget your first and that includes James Bond too. His presence as the suave sleuth in the Hollywood skies was so bright that he was famous the world over. But he has also done a lot of other movies which equal appreciation and love. Although critics and masses are divided about The League Of Extraordinary Gentlemen, we still love it because it was Connery's last live-action before he retired. Yet another reason was it was perhaps one of those rare movies of the time which had a famous Indian actor in the lead cast. In this case, it was Naseeruddin Shah playing Captain Nemo! Sean Connery, First James Bond Actor, Dies at 90

Speaking about it Shah had told Film Companion, "That was one of the most boring experiences I have ever had. The shooting dragged on for six months but I was making so much money out of it that I didn’t complain too much. The film itself was unbearable; I could not sit through it.”

Connery was paid $450mn for his role as Quatermain in the movie. The late actor apparently was so pissed at the way the movie turned out and the reception it received that he decided enough was enough. 2003 thus marked the end of his acting career. He had done a bit of voice acting here and there till 2012. He had told a reporter in a 2007 interview, "The last one I did, [Gentlemen director Stephen Norrington] was given $85 million to make a movie in Prague, but unfortunately he wasn't certified before he started because he would have been arrested for insanity."

Clearly, he wasn't the man to mince words and that's why we will miss Sean Connery the man along with a wonderful actor!

(The above story first appeared on LatestLY on Oct 31, 2020 07:13 PM IST. For more news and updates on politics, world, sports, entertainment and lifestyle, log on to our website latestly.com).