Shelly: Awkwafina, Karen Gillan to Reunite for an Action Comedy 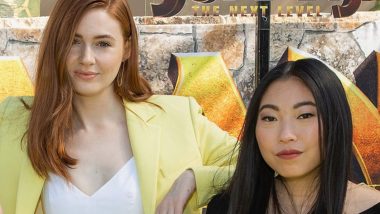 After Jumanji: The Next Level, actors Awkwafina and Karen Gillan are reteaming for another action-comedy, "Shelly". The film, billed as a cross between "Mean Girls" and "Barry", revolves around Awkwafina's character Shelly Wheeler, who left the town after an embarrassing prom prank and became a hardened hit-woman, reported Deadline. Mission Impossible 7: Nicholas Hoult Exits Tom Cruise’s Actioner, Esai Morales Will Replace Him as the Antagonist.

When she learns that her next kill is none other than her former high school bully Diana Park, played by Gillan, she is beyond happy. But things take an unexpected turn when Diana befriends Shelly and introduces her to a cool crowd. Shelly learns that she and Diana are the target of another assassin team. The Blacksmith: Nick Jonas, Lawrence Fishburne to Lead Pierre Morel’s Action Thriller.

The script has been written by Michael Doneger and Liz Storm and Jude Weng is attached to direct. Awkwafina is best known for her critically acclaimed role in "The Farewell" while Gillan is known to fans as Nebula in "The Guardians of the Galaxy" films and "Avengers: Endgame".