Tom Cruise Just Pushed all Boundaries, Will Collaborate with Elon Musk's SpaceX For a Movie to be Shot in Space

Yes, Tom Cruise is indeed working on something very big. The actor plans to work with Elon Musk's SpaceX and Nasa for an action-adventure that will be shot in space. No kidding. 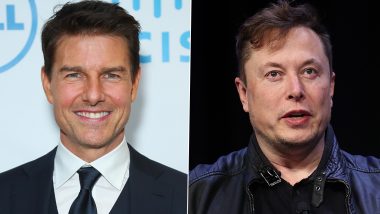 Tom Cruise and Elon Musk to collaborate for a movie to be shot in space (Photo Credits: Instagram)

Tom Cruise is determined to push his boundaries... literally. After boggling your minds with his high-octane action scenes in Mission Impossible, the actor, 57, is now looking forward to going to space and shoot a first of its kind movie there (not Mission Impossible). As per reports in Deadline, he will collaborate with Elon Musk's company, Space X for an action-adventure and if all goes well, Cruise will become the first Hollywood actor to actually go to space for the shooting of his next. Top Gun: Maverick New Trailer - Tom Cruise Soars High in the Sky as 'One of the Finest Pilots' (Watch Video).

Currently, no big studio is involved with this project as the talks are still going on. It's pretty early to discuss this project in depth and Cruise is still working with Musk to discuss the logistics. The actor and SpaceX will also collaborate with NASA (obviously) to sort things out and let's hope for things to eventually fall in place. And for the ones who don't know, this isn't the first time when the Top Gun actor is discussing a project that will be shot in real space. Coronavirus Affects Hollywood: From Tom Hanks's Diagnosis to Delay In Mission Impossible 7, All That Has Been Hit By The COVID 19.

Some twenty years ago, James Cameron had approached Cruise with a similar idea. “I had a contract with the Russians in 2000 to go to the International Space Station and shoot a high-end 3D documentary there. And I thought, ‘S—, man, we should just make a feature.’ I said, ‘Tom, you and I, we’ll get two seats on the Soyuz, but somebody’s gotta train us as engineers.’ Tom said, ‘No problem, I’ll train as an engineer.’ We had some ideas for the story, but it was still conceptual," the director had said in one of his interactions in 2018. While that collaboration never really happened, let's hope Cruise is able to fulfil his dream this time.

It's also unclear which director will Tom choose to come on board with him for this mighty project. Stay tuned we might have an update very soon.

(The above story first appeared on LatestLY on May 05, 2020 08:21 AM IST. For more news and updates on politics, world, sports, entertainment and lifestyle, log on to our website latestly.com).