From Killing Eve to Peaky Blinders and Coronation Street, check out who won big in which category at TV Choice Awards 2020. 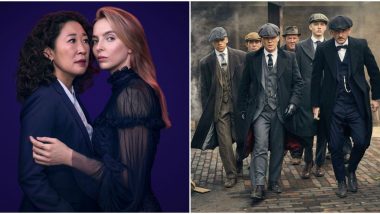 The annual TV Choice Awards were held virtually for the first time in the ceremony's history. While one may have expected Killing Eve to bag the Best Drama Series trophy, it was a rather sweet surprise to see Peaky Blinders defeat it in this category. But hey Killing Eve fans, you need not be disappointed as Jodie Comer won the Best Actress trophy for the second time in a row. Doc Martin star Martin Clunes won the award in the Best Actor Category and interestingly, the series is ending in 2021. Which means, yes, no more Doc Martin in future guys! Peaky Blinders Season 6: UK Government Approves Filming of Cillian Murphy’s BBC Show Under Social Distancing Guidelines.

Accepting his award, Martin in his virtual celebration said, "Thank you so so much for this amazing award. I'm so glad that you still like this show after nine series! You obviously like it enough to vote for me because there was some classy competition this year in the actors category. We're blown away. It's a family business and we love making it, down in Cornwall." Killing Eve Star Sandra Oh Wants to Fall in Love Naturally, Says ‘Can’t Force That Stuff to Happen’.

Interestingly, Britain's Got Talent didn't win the trophy in the Best Talent Show category this year. Instead, The Great British Bake Off was declared as the winner and the team is super proud of their achievement. "This is gonna take pride of place in the tent," said Paul Hollywood as he accepted the award via a phone call.

(The above story first appeared on LatestLY on Sep 08, 2020 08:34 AM IST. For more news and updates on politics, world, sports, entertainment and lifestyle, log on to our website latestly.com).