Amit debuts as the host of the show t6itled Goodnight India, along with TV actor Jiya Shankar as indeed with a set of talented comics and hasya kavis who would perform across episodes of Goodnight India! 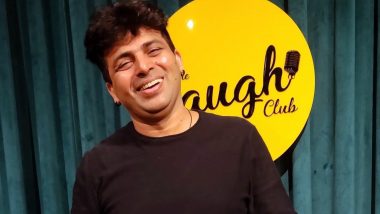 With the sole purpose of offering the audience lighter, entertaining comical content and a good sleep, Sony SAB has come up with the show 'Goodnight India' to ensure that you don’t miss your daily dose of happiness and positivity. The makers are adamant on offering Meethi Si Hassi and Achhi Neend to end your day well. Amit Tandon, known for his impeccable wit and humor, has been roped in to anchor this laugh riot. Amit debuts as the host along with TV actor Jiya Shankar as indeed with a set of talented comics as well as hasya kavis who would perform across many episodes.

Amit chatted exclusively with LatestLY to talk about his freshly minted show. "Comedy has changed a lot in the last five years or so. Earlier it was limited to major cities such as Mumbai, Delhi and Bangalore. But now you see stand-up comedians coming from smaller cities and bringing in their ideas and sensibilities to diversify the landscape of comedy. Of course, the push and the reach, and even the basic platform is provided by social media and the digital space. Comedians are not just performers anymore, they are content creators who have eventually found their ways into movies, productions, and shows," says Amit about the ever-changing and the ever-evolving landscape of comedy.

"It is heartening to see how comedians are converting their skills into numbers, both money-wise or views wise. The sheer avenues that are available today, if you have great content ideas, are simply unbelievable. This wouldn't have been possible ten or twenty years back, as even the audience did not know much about the business, but now even the audience wants to participate and perhaps perform in equal capacity," he continued.

It's a common sentiment that this is the best time to be a comedian, but a terrible time to deliver the comic content for we are growing more and more sensitive, and perhaps getting intolerant at times. Does Amit fear touching the proverbial sensitive nerve, we wondered. "I believe that 9 times out of 10 your content is not objectionable. I can certainly talk about myself. There have been hardly any occasions when I was asked to tweak my content or change it completely.  Adaptability is a gradual process, so either content creators are going to modify a little or the audience will eveolve, or both can happen simultaneously," he explains.

How do creators on his shows keep the balance between healthy banters and creative suggestions? Are there any differences that get resolved while working on the same platform, we quizzed. "Banter, yes!! there's lots of it. But nobody has that malice towards each other, There's a lot of leg-pulling that happens but that happens with a good spirit. As far as the creative side is concerned, nobody interferes in each other's material. There will be suggestions but no interference. not really! I get a lot of wisecracks at me related to my age. I am 46 but that all is done to draw giggles. Nothing more," clarifies Amit.

As a comedian does Amit draw his own Laxman Rekha, so to speak, in order to know where he must stop "I would not punch anyone down. Punching up is kind of OK mostly, but punching down when you crack a joke on those who are vulnerable or less privileged than you, I would never do that," he concluded.

(The above story first appeared on LatestLY on Jan 27, 2022 03:16 PM IST. For more news and updates on politics, world, sports, entertainment and lifestyle, log on to our website latestly.com).