MasterChef Australia 13 runner-up Pete Campbell has plans to visit India and do a pop-up restaurant with Bollywood actress Shweta Salve, who had shared with him a recipe for the reality TV cookery show. 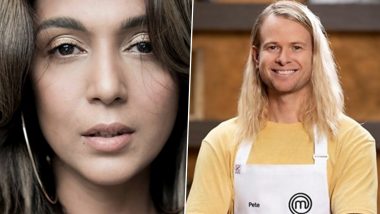 MasterChef Australia 13 runner-up Pete Campbell has plans to visit India and do a pop-up restaurant with Bollywood actress Shweta Salve, who had shared with him a recipe for the reality TV cookery show. The tattoo artist, who is now home-bound in Sydney because of a Covid-19 lockdown in force in his city, said he would head for India as soon as flights resume between Australia and India. Speaking with IANS from Sydney, Campbell recalled his conversation with Salve, whom he had connected with on Instagram. MasterChef Australia 13 Judge Andy Allen Speaks on Why Indian Cuisine Is Always a Hit Factor.

"She has a restaurant and she wants me to come and take over for a few nights and do a pop-up there," he said. "I would absolutely love to do that." Salve is known for her appearances in 'Hip Hip Hurray', 'Kittie Party' and 'Left Right Left'. If Campbell and Salve are able to implement their plan, the Sydneysider will be the second "MasterChef Australia" celebrity to get into the restaurant business in India. Sarah Todd, who had appeared in the sixth season (2014) of the cookery show, now co-owns and operates a successful restaurant-cum-beach club named Antares in Goa. Masterchef Australia Season 13 Winner Justin Narayan Marries Girlfriend Esther Smoothy.

The self-taught cook, who cites Italian chef Christian Puglisi as his inspiration, sounded hopeful when he said. "As soon as the lockdown is over, I think I'll be busy. There are a lot of opportunities coming through. Life is going to be completely centred around food and cooking and that wasn't ever the plan before I moved to Australia." An American, Campbell quit his corporate job of 10 years in Los Angeles and moved with his wife and baby daughter (and another on the way) in 2015.

"It seems very exciting and I am happy to ride this wave as long as possible and take advantage of any opportunity that comes along," Campbell said. "I am going to come to India as soon as I can. A lot of people want to see me in India and I can't wait to visit and travel around, meet people and cook with them. As soon as world travel is allowed, I will make sure I am in India," he added.

Talking about the recipe Salve had shared with him, Campbell said he was going to try and do it, and post about it. "I would love to learn to make Indian food authentically," he added. About the places he plans to visit in India, he said: "I haven't thought about it in depth and don't have a plan, but I will go to as many places as I could get to." In case you missed "MasterChef Australia 13", you could watch it on Disney+ Hotstar Premium.

(The above story first appeared on LatestLY on Jul 28, 2021 05:56 PM IST. For more news and updates on politics, world, sports, entertainment and lifestyle, log on to our website latestly.com).