Bhushan Kumar plays a master-stroke gets Rajkumar Hirani to step into Subhash Kapoor's shoes for Mogul, will Aamir Khan follow? 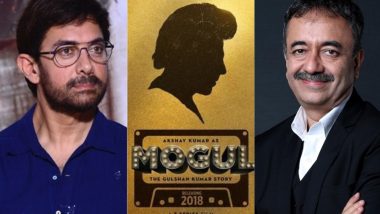 First Akshay Kumar walked out of Bhushan Kumar’s ambitious project – a biopic on his late father Gulshan Kumar – Mogul. The film was supposed to be in the back-burner, but Aamir Khan came to his rescue. Mr Perfectionist we hear suggested massive changes in the script and sat down for long hours with the film’s then director Subhash Kapoor to improvise the existing script. Akshay’s big shoes was not filled in, but with Aamir backing this project, the movie got a new lease of life.

However, when Me Too storm hit the Hindi film industry many actors and producers came together to stand up in solidarity with the victims who were taking on the big wigs. One of the first people to take a stand on this issue was actor Aamir Khan. The actor-filmmaker on finding out that Subhash was accused of sexual misconduct in the past decided to distance himself from the movie. In fact, AK and wife Kiran Rao even issued a statement about the same.

We now hear that Bhushan Kumar has knocked on a filmmaker’s door who Aamir Khan or any A-lister cannot refuse. With a recent hit biopic under his belt Rajkumar Hirani was one of the safest and best choices for a film that the T-Series head honcho is putting all his might behind. According to an online portal report the Sanju helmer has liked the story and the makers are keen on having him on board. However, the Munna Bhai director is yet to give his final nod on taking over a project. Also see: Subhash Kapoor Reacts to Aamir Khan Backing Out of Mogul

Even though the production house has ousted Subhash Kapoor from the film, one cannot ignore the fact that Bhushan Kumar himself has been accused for misbehaviour. We will have to wait to find out if Rajkumar Hirani will say a yes to this proposal. And will Aamir follow his footsteps? Will Mogul be third time lucky? Watch this space for all the updates.

(The above story first appeared on LatestLY on Oct 22, 2018 10:50 PM IST. For more news and updates on politics, world, sports, entertainment and lifestyle, log on to our website latestly.com).