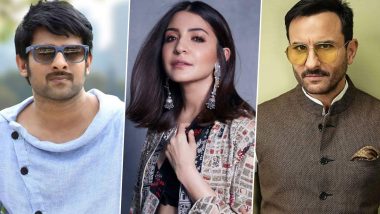 Fans are excited about Prabhas' next in which the Baahubali star will be playing the role of Lord Ram in Om Raut directorial - Adipurush. The magnum opus is to be made on a grand scale and as per the recent development, the makers have roped Saif Ali Khan as the antagonist Raavan. There were also reports doing rounds saying Anushka Sharma is the female lead to star opposite Prabhas in Adipurush starring Prabhas. Adipurush: Music Director MM Keeravani Roped in As Composer For Prabhas and Om Raut’s Next.

However as per sources in the industry, and a report in PINKVILLA, states that there is no fact in those speculations. A trade source revealed, "Anushka is raring to resume work immediately post her pregnancy and there will be big announcements in place as and when the time is appropriate but Adipurush definitely doesn’t feature in her plans. She was not involved in the project at all and thus, she is definitely not doing the film. There has been no discussion on anything about this film right from the script to the dates with her." From Saif Ali Khan in Adipurush to Ajay Devgn, Alia Bhatt in RRR: Looking at Bollywood Actors Who Will Be Seen in Regional Releases!

Adipurush is expected to go on floors by January 2021, the month that also marks Anushka Sharma's due date. Anushka announced her pregnancy by the end of August in an Instagram post, in which she is seen flaunting her baby bump as she stands next to Virat Kohli. She had written, "And then, we were three! Arriving Jan 2021."

Adipurush is bankrolled under Bhushan Kumar's T-Series. This film will be Prabhas’s third with the producer after Saaho and Radhe Shyam. The makers are eyeing to release this mega-budgeted Ramayan saga by 2022.

(The above story first appeared on LatestLY on Sep 15, 2020 06:02 PM IST. For more news and updates on politics, world, sports, entertainment and lifestyle, log on to our website latestly.com).