Ala Vaikuntapuramlo reunites Allu Arjun and Trivikram Srinivas for the third time, after S/O Satyamurthy and Julai. This is the 19th film of Tollywood’s favourite actor, which also features Pooja Hegde and Nivetha Pethuraj as the lead actresses. 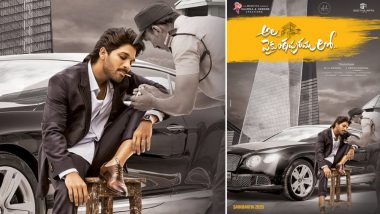 Allu Arjun’s upcoming flick, Ala Vaikuntapuramlo, is an action comedy directed by Trivikram Srinivas. This is the 19th film of Tollywood’s favourite actor, which also features Pooja Hegde and Nivetha Pethuraj as the lead actresses. On September 1 the makers have released the poster of Ala Vaikuntapuramlo, and fans are mighty impressed. It is ‘mass plus class’; that is what Allu Arjun’s fans have to say after seeing the actor’s edgy avatar. Ala Vaikunthapuramulo: Allu Arjun's AA19 Gets a Title and the Amazing First Look is All Set to Drive His Fans Crazy (Watch Video).

Allu Arjun is not just a versatile actor and a dancer, but he is also known to be the stylish actor of Tollywood. This effortlessly stylish avatar of the handsome hunk has been loved by Tollywood movie buffs. In this poster Allu Arjun is seen dressed up in a formal attire, casually seated on a high stool seat, making a police official light his cigarette, against the backdrop of a luxurious car and skyscraper. CONFIRMED! Tabu to Share Screen Space with Allu Arjun in AA19 (Watch BTS Video).

The First Poster Of Ala Vaikuntapuramlo:

Here’s What Fans Have To Say:

The Most Versatile Actor From Southindian Cinema ....💓🔥#AlluArjun

WTF.... Man u r beyond imaginations

U killed with style and attitude 😍😍#AlaVaikunthapuramuloPoster

All Hearts For First Poster Of Ala Vaikuntapuramlo

Ala Vaikuntapuramlo reunites Allu Arjun and Trivikram Srinivas for the third time, after S/O Satyamurthy and Julai. The movie buffs are excited to see this hit actor-director back together on a project and the expectations are high. The film which is scheduled to be released on Sankranthi 2020 also features Tabu, Navdeep, Jayaram, Sathyaraj, Rajendra Prasad and Vennela Kishore in key roles. Ala Vaikuntapuramlo produced under the banners of Geetha Arts and Haarika & Hassine Creations is clashing with Mahesh Babu’s 26th film Sarileru Neekevvaru. Let’s wait and watch whichf film out of the two rules at the box office.

(The above story first appeared on LatestLY on Sep 01, 2019 11:26 AM IST. For more news and updates on politics, world, sports, entertainment and lifestyle, log on to our website latestly.com).