Anirudh Ravichander Birthday: From Rajinikanth To Thalapathy Vijay, 5 Superstars Of Tamil Cinema For Whom He Composed Chartbusters!

Anirudh Ravichander, who celebrates his 31st birthday on October 16, had made his debut as a music composer with the film 3 and how can one forget the hit track “Why This Kolaveri Di”! 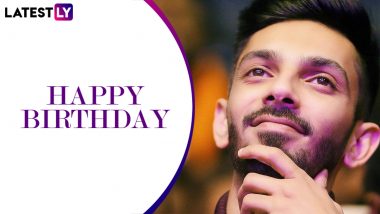 Anirudh Ravichander is a young, talented music composer, known for his works in Tamil Cinema. The talented artiste is just 31-year-old and at such young age he has worked with some of the leading stars of Kollywood. Son of veteran actor Ravi Raghavendra, Anirudh has won many awards too for his amazing works. You’d be amazed to know that Anirudh’s great-grandma was the first female music composer of Kollywood. And when he was just 10-years old, he had started to compose music and by the age of 22, he got his first break with the film 3 that had featured Dhanush in the lead. Master Song Polakatum Para Para Lyric: This Upbeat Anirudh Ravichander Composition Featuring Vijay And Vijay Sethupathi Is Really Addictive (Watch Video).

Yes, birthday boy Anirudh Ravichander had made his debut as a music composer with the film 3 and how can one forget the hit track, “Why This Kolaveri Di”, which was composed by him and sung by Dhanush. This young talent has learnt piano from Trinity College of Music, London, learnt Carnatic music and also holds a diploma in sound engineering. On the occasion of Anirudh’s birthday, let’s take look at the list of Tamil Cinema’s biggest superstars for whom Anriudh has composed music.

Dhanush – It all started with the film 3. He had reportedly delivered a variety in his very first album. Apart from this, Dhanush’s other films for which Anirudh has composed music include Velaiyilla Pattathari, Maari and Thangamagan.

Thalapathy Vijay – In 2014, AR Murugadoss has roped in Anirudh as the music composer for the film Kaththi that had featured Thalapathy Vijay in the lead. Well, how can one forget the track “Selfie Pulla” that became a chartbuster. Anirudh collaborated with Thalapathy for the second time for the film Master and the film’s song “Kutti Story”, “Vaathi Coming”, and all were a huge hit. He’s teaming up with Vijay once again for the upcoming film Beast.

Rajinikanth – In 2019, Anirudh composed music for Thalaivar’s film Petta. Then the second time, which was the following year, he teamed up with the superstar was for the film Darbar.

Vijay Sethupathi – Anirudh composed music for Vignesh Shivan’s directorial, Naanum Rowdy Dhaan, featuring Vijay Sethupathi and Nayanthara in the lead. He had composed the film’s soundtrack album and background score. You’d be amazed to know that in 2016 he has also crooned a song titled “Hey Mama” for the actor for the film titled Sethupathi.

Ajith Kumar – The first time that Anirudh had worked for Thala Ajith was for the film Vedalam and the song “Aaluma Doluma” had become popular. He has also composed background score and soundtrack for the film Vivegam.

Anirudh Ravichander has scored music for some of the biggest stars and their blockbuster films. He has many intriguing projects lined-up and fans just can’t wait for it. We wish the talented star, Anirudh Ravichander, a very happy birthday and a great year ahead!

(The above story first appeared on LatestLY on Oct 16, 2021 08:10 AM IST. For more news and updates on politics, world, sports, entertainment and lifestyle, log on to our website latestly.com).