Arjun Reddy Fame Vijay Deverakonda Is the ‘Most Desirable Man Of 2019’, and His Fans Cannot Keep Calm 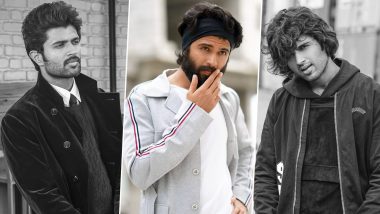 Vijay Deverakonda shot to fame for his role in the Telugu film, Arjun Reddy. The actor’s performance in it was praised by movie buffs. Be it Geetha Govindam or Dear Comrade or World Famous Lover, movie buffs love it when this handsome hunk plays the role of a lover on the big screens. Well, be it his charming avatar or his performance in films, Vijay Deverakonda has been declared as the ‘Most Desirable Man Of 2019’, and his fans cannot keep calm. Vijay Deverakonda-Ananya Panday's Leaked Pics from Puri Jagannadh’s Film Shoot Will Remind You of Aamir Khan-Rani Mukerji from Ghulam.

As per the list of ‘Hyderabad Times 30 Most Desirable Men 2019’, south actor Vijay Deverakonda has topped the list, and that too for the second consecutive year, reports TOI. This list consist of men under 40 across various fields. An online poll is conducted and along with the input by the internal jury, the result is declared. When VD was asked about his win for the time second time in a row and what’s the secret behind it, he was quoted as saying, “I have no secret. I’m one of them — a regular boy breaking through and becoming whoever he wants to be. And I think that’s why they connect with me. But we need to ask the people to understand better. Even I am curious to know why I’ve been voted the Most Desirable Man. But all that aside, I feel loved. It feels nice to know that people love me so much.” Let’s take a look at his fans’ reaction. Vijay Deverakonda-Ananya Panday’s Untitled Film’s Shooting Schedule in Mumbai Completed, Fans Can’t Wait to Watch This Reel Couple!

For The Second Time In A Row

It's no surprise he tops the list for the second consecutive year...

Fans Are Definitely Happy To See The Results

@TheDeverakonda Isn't it illegal to look this HOT?🔥🔥

All Hearts For VD

And Some Good Luck For Bollywood Debut...

All the best for the #Fighter pan India movie team and will break all the records in the industry. pic.twitter.com/5cQBzV7jrp

On the work front, Vijay Deverakonda is all set to make his Bollywood debut with Ananya Panday. The shooting of the film has kicked-off already, and few pics from the sets had hit the internet as well. Directed by Puri Jagannadh, this untitled project is bankrolled by Dharma Productions and Puri Connects.

(The above story first appeared on LatestLY on Mar 18, 2020 08:58 AM IST. For more news and updates on politics, world, sports, entertainment and lifestyle, log on to our website latestly.com).