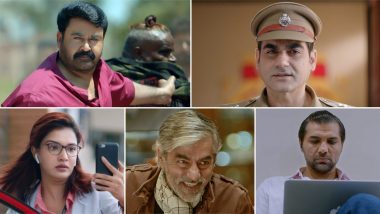 Siddique (along with his former partner Lal) had created a legacy for himself making light-hearted entertainers like Ramji Rao Speaking, In Harihar Nagar, Godfather, Vietnam Colony, Hitler, Friends etc. Big Brother, going by the trailer, feels nothing like the films that he had made before, being a pakka action entertainer, with Mohanlal in a larger-than-life role. He plays a man, Edwin Moses (that can be a deception) who has a past involving narcotics, but now has settled himself as a family man. But his past comes knocking on his doorstep, and he is back to kicking ass. If you do feel getting vibes of Lucifer from the trailer, join the club!

Arbaaz Khan, possessing a very obvious dubbed voice, plays what looks to be an honest police officer wanting to take down the drugs ring. Superstar Mohanlal Releases the First Look Poster of Marakkar: Arabikadalinte Simham on January 1, 2020! A Perfect New Year Gift for All Lalettan Fans.

Check out the trailer of Big Brother below:

(The above story first appeared on LatestLY on Jan 07, 2020 07:45 PM IST. For more news and updates on politics, world, sports, entertainment and lifestyle, log on to our website latestly.com).