As a part of the promo, Alia Bhatt utters the viral dialogue from Nandamuri Balakrishna's hit Simhaa. As the actress utters 'Dhabidi Dhibide', the audience goes crazy. Have a look. 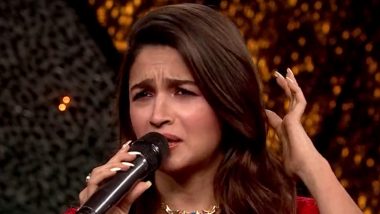 The grand finale of Bigg Boss Telugu 5 saw an ensemble of stars on the dais as Bollywood actress Alia Bhatt wowed the audience when she mouthed Balakrishna's famous dialogue from Simhaa. As the winner of Bigg Boss Telugu 5 is to lift the trophy, India's biggest celebrities are to grace the event on Sunday. Bigg Boss Telugu 5: Alia Bhatt, Ranbir Kapoor, Sai Pallavi, Rashmika Mandanna To Grace Nagarjuna’s Reality Show’s Grand Finale (Watch Promo).

The producers unveiled a promo featuring the stars on Sunday before the event starts. Alia Bhatt, who is to allure the audience in S.S. Rajamouli's RRR, is seen interacting with the finalists of Bigg Boss Telugu 5. As a part of the promo, Alia utters the viral dialogue from Nandamuri Balakrishna's hit Simhaa. As Alia Bhatt utters 'Dhabidi Dhibide', the audience goes crazy in the promos.

Ace director Rajamouli with Bollywood stars Ranveer Singh and Alia Bhatt are to appear on the show, while director Sukumar, Rashmika Mandanna, and Devi Sri Prasad from the 'Pushpa' team are also seen in the promos of the upcoming finale event.

Shyam Singha Roy stars Nani, Sai Pallavi, and Krithi Shetty are also among the guests who enter the Bigg Boss house at the grand finale event. With many more performances by Shriya Saran, Rahul Sipligunj, Arun Kaundinya, and the ex-contestants of Bigg Boss Telugu 5, the promos have raised the buzz around the finale event. Ram Charan and Jr NTR are also among the guests who are expected to attend the Live event of Bigg Boss Telugu 5 grand finale.

83 actor Ranveer Singh is to be on the stage as well, while Deepika Padukone will interact on the show via video conference. VJ Sunny, singer Sreerama Chandra and Shanmukh Jaswanth are in the race to win the title, as Siri and Manas are eliminated from the list.

(The above story first appeared on LatestLY on Dec 19, 2021 05:04 PM IST. For more news and updates on politics, world, sports, entertainment and lifestyle, log on to our website latestly.com).