C U Soon is an experimental thriller, directed by Take/Off fame Mahesh Narayan. From his debut film, he brings back Fahadh Faasil as one of the three protagonists of his first film, with Fahadh also being the producer. C U Soon also stars Roshan Mathew and Darshana Rajendran in the lead 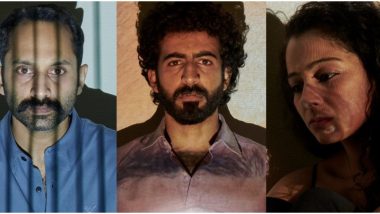 Without further ado, let me say it here that the below post is filled with enough spoilers about C U Soon. So tread ahead carefully, if you have not seen the film. C U Soon is an experimental thriller, directed by Take/Off fame Mahesh Narayan. From his debut film, he brings back Fahadh Faasil as one of the three protagonists of his first film, with Fahadh also being the producer. C U Soon also stars Roshan Mathew and Darshana Rajendran in the lead, along with Maala Parvathi and Saiju Kurup in the supporting cast. C U Soon Movie Review: Fahadh Faasil, Darshana Rajendran, Roshan Mathew Excel in This Experimental Thriller That Exposes a Horrifying Social Crime.

C U Soon, scripted by the director himself, begins with Jimmy (Roshan Mathew), a young man working in UAE, who finds a Tinder match in Anumol (Darshana Rajendran). After hours of video-calls and flirty texts, Jimmy falls for Anumol, who isn't very forthcoming about her own life (she doesn't even have a , and even proposes marriage to her. Even though he hasn't met her before.

When Anu calls him one night with her face badly bruised, claiming her father did so, Jimmy picks her from near her home and takes her to his flat. As she recuperates, he confronts her father, who apologises and borrows her new number from him. When he returns home he finds her missing with only a video message that he presumes to be a suicide note. C U Soon Full Movie in HD Leaked on TamilRockers & Telegram Links for Free Download and Watch Online; Fahadh Faasil-Roshan Mathew's Film Faces Wrath of Online Piracy?

With the police after him, Jimmy seeks the help of his hacker cousin Kevin (Faahad Faasil) to seek our her whereabouts and save him from the mess. Kevin, through a lot of hacking, finds out the horrifying truth about Anumol, realising that compared to her woes, they had it easy.

C U Soon had been shot during lockdown, with the team following all precautions. In creating a gripping suspense thriller, Mahesh Narayan borrows the format of the Hollywood film, Aneesh Changathy's Searching, starring John Cho. The entire movie has been shot through virtual format, with events shown through social networking apps, web-cams, laptop screens and video calls. The idea adds a lot of intrigue to the film, making C U Soon a unique and brave thriller made in Malayalam Cinema.

So what do all the events in the film lead to? Here's what happens in the climax of the film.

Through hacking into Anumol's real FB profile and getting access to her messages to her real family, Kevin discovers her tragic backstory. Anumol doesn't belong to any affluent family settled in UAE as she initially told Jimmy. She belongs to a poor household in Ranni, who is one of the many girls trapped in a fake employment racket and brought to UAE to be sold into a prostitution ring. There she is forced to be a call girl and suffers enough torture.

The family she is staying right now also has a daughter named Anumol, who is in Bangalore, and it is her identity that she stole to speak to Jimmy. OTT Releases Of The Week: Disney's Mulan, Fahadh Faasil's C U Soon, Netflix's Bad Boy Billionaires and More To Watch In First Week of September 2020.

Through Jimmy, she was seeking a means to escape from her hell, having already spoken to the consulate to make an escape. But while staying with Jimmy, she begins to have a hope of a normal life. Which gets shattered when Jimmy inadvertently meets her pimp (who she had passed off her father). She also gets a call from Jimmy's mother, who learnt the truth about her. This is why she chose to leave Jimmy to go to the consulate to help them expose the racket.

Through her passport details, Kevin finds out that she is returning to Kerala, the same day as Jimmy has been called back to The States by his mother. Kevin asks Jimmy if he still loves her, and tells him that she is waiting to board the flight at another gate. Despite his best efforts, Jimmy misses meeting her, her flight already departed.

In Kerala, Anumol gives interviews to channels giving more details of the racketeers, leading to the arrest of a few. Kevin manages to talk to Anu, and asks her why she didn't leave early from Jimmy's life when she had the chance. Her response gives him the idea that she was in love with him, and was not merely using him. When he also realises that Jimmy still has feelings for her, Kevin gives him his number.

We don't know if Jimmy calls Anumol or if he goes to meet her in her home at Ranni, as the movie ends on a cliffhanger. There is post script that says that the entire film has been based on the virtual lives of these characters. The next chapter will be on their real-lives and it will come straight to theatres, with the film's title - C U Soon - splashed on the screen. So are we going to have a sequel, where we get to see more on Jimmy and Anumol's love story?

(The above story first appeared on LatestLY on Sep 01, 2020 09:38 PM IST. For more news and updates on politics, world, sports, entertainment and lifestyle, log on to our website latestly.com).