Cobra New Poster: Chiyaan Vikram Looks Like He Got Caught in Thanos’ Snap, but With a Numerical Twist in This Stylish New Look! 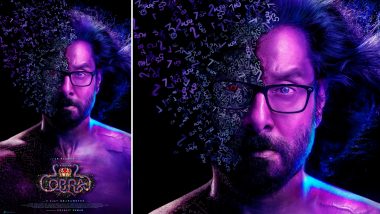 Chiyaan Vikram's next Cobra is very much anticipatedly being waited by fans for months. Directed by Ajay Gnanamuthu, the details of what the film is about is still being kept under wraps and we are yet to see a proper teaser or trailer for the film. What we have been hearing is that Cobra is a thriller that could have supernatural themes, which is why the new poster of the film, featuring its lead caught our attention in the most intriguing way. Cobra: On Irfan Pathan's Birthday, Makers Reveal He's Playing French Interpol Officer in Chiyaan Vikram Starrer.

The new poster has a bespectacled Vikram caught in what appears to be Thanos' infamous snap, though there is a little twist there. Parts of his face that is being disintegrated is made up of numbers. While we are no mathematical geniuses here, we wonder if those numbers represent something, a message that the film wants to tell us?

Even the tagline is curious - "Every problem has a mathematical solution." This looks more apt tagline for Russell Crowe's A Beautiful Mind. Chiyaan Vikram Becomes Grandpa As His Daughter Akshita and Hubby Manu Ranjith Welcome a Baby Girl!

The poster make us really excited for the trailer of the film, that would make us at least know what Cobra is all about. Cobra also marks the full-length acting debut of former cricketer Irfan Pathan.

The movie also stars Srinidhi Shetty, KS Ravikumar, Kanika, Babu Antony, Roshan Mathew, and Miya. AR Rahman is scoring the music for the film. The release date for Cobra hasn't been confirmed yet.

(The above story first appeared on LatestLY on Dec 25, 2020 11:41 AM IST. For more news and updates on politics, world, sports, entertainment and lifestyle, log on to our website latestly.com).