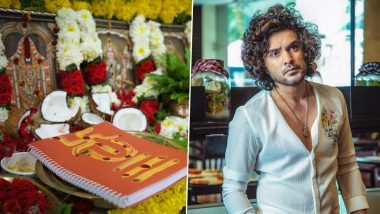 The makers of Siddhu Jonnalagadda-starrer DJ Tillu, that has been one of Tollywood's biggest success stories of 2022, have officially announced the sequel for DJ Tillu. The makers announced that DJ Tillu sequel will start filming in August. Producer Suryadevara Naga Vamsi on Saturday shared a cryptic post on social media with the caption - 'Gearing up for Round 2'. It’s Official! DJ Tillu, Starring Siddhu Jonnalagadda And Neha Shetty, To Stream On Aha From March 4.

"The most awaited Franchise... Gearing up for Round 2. Crazy adventure starts filming in August!", he wrote, as he shared a picture from the muhurat event for DJ Tillu. DJ Tillu stood its ground and became a fantastic entertainer with incredible commercial success in a year when the industry saw pan-India biggies like RRR, which isn't normal. For this reason, the film's creators, Sithara Entertainments, have chosen to create a sequel. DJ Tillu Actress Neha Shetty Thanks Fans For Making The Film A Huge Success (View Post).

The most awaited Franchise... Gearing up for Round 2 🔥

(The above story first appeared on LatestLY on Jun 26, 2022 01:18 PM IST. For more news and updates on politics, world, sports, entertainment and lifestyle, log on to our website latestly.com).