Joji, now streaming on Amazon Prime Video, has been getting rave reviews from most of the critics. The film marks the third super-successful collaboration between director Dileesh Pothan and National Award-winning actor Fahadh Faasil, after the acclaimed Maheshinte Prathikaram and Thondimuthalum Driksakshiyum. 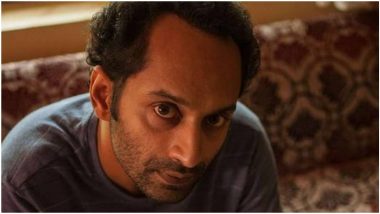 Joji, now streaming on Amazon Prime Video, has been getting rave reviews from most of the critics. The film marks the third super-successful collaboration between director Dileesh Pothan and National Award-winning actor Fahadh Faasil, after the acclaimed Maheshinte Prathikaram and Thondimuthalum Driksakshiyum. Joji is written by Shyam Pushkaran, who has been a critic's delight with his recent penmanship efforts and had also written the screenplays for Dileesh Pothan's other movies too. Joji Movie Review: Fahadh Faasil Brings Another Shade of Grey to Dileesh Pothan’s Macbethian Tale of Greed.

Joji is loosely based on Macbeth, the famous drama written by William Shakespeare. It revolves around a rich family whose patriarch's domineering nature has stifled the desires and wishes of his sons. Especially the youngest son Joji, played by Fahadh, a seemingly good-for-nothing fellow who wastes his father's money on bad business opportunities. Baburaj plays the eldest son Jomon, who is closest among his siblings to his father, while Unnimaya Prasad plays Bincy, the wife of the second brother, who is a passive observer and silent prodder to Joji's wrong-doings. (SPOILER ALERT)

So what wrong does Joji do? When his father nearly meets his maker after suffering from a stroke, Joji and his siblings believe they got their chance at being financially independent, ironically by dividing the properties that their father made. When the father makes a surprise recovery, Joji sees his plans dashed. After his wheelchair-bound father tries to strangulate Joji for even suggesting to offer them money, Joji decides to commit patricide but make it look natural. Joji Movie Review: Critics Give a Big Thumbs-Up to Fahadh Faasil, Dileesh Pothan’s Third Collaboration.

By mixing medicines, he manages to pull off what he intended to do, but Joji's fate continues to play tricks on him. Jomon is not very keen to get the properties divided, his erratic behaviour is also bringing people's suspicion on the father's demise (though Jomon had nothing to do with it). Jomon also gets suspicious about Joji, so the latter ends up killing his elder brother and pin the blame on another man.

Unfortunately for Joji, his crimes and lies began to catch up to him, the rest of the family finds out what he did and even though he blackmails his brother, that doesn't work. With the police coming to interrogate him, Jojo tries to commit suicide by using the same airgun after giving his 'murder confession. But like always, even this plan of his doesn't work for him.

Why Did Joji Fail?

Of course, Crime never pays, except if you are a politician. But in the case of Joji, he was bound to fail from the start itself. For all the malevolence and greediness that he displays, Joji isn't cunning or shrewd enough to pull off a murder convincingly. He couldn't have gotten away murdering his father, if his sister-in-law who witnessed him replacing the pills, had ratted him out. Bincy who wants to seek an independent existence outside her father-in-law's house, would have also wanted him dead. If her intentions were pure, Joji would have gone to jail already.

Joji has also to depend on Google to look for ideas to pull him out of sticky situations. He has no clue about what even is happening around his house, otherwise he would not even gone fishing in a pond that was recently flooded. He even couldn't pull off a sad face at his dad's funeral, instead choosing to hide in his room, which is why Bincy asks him to put on a mask. Thanks to COVID-19, the mask made for a good cover for him.

All these show that Joji really lacks the ingenuity and the temerity to pull off a perfect crime. After murdering Jomon, Joji gets even more cocky thinking he got away, though he should have realised he had left more breadcrumbs that he intended. His former schoolmate on whom he pinned the crime, could have told a different story - the real version - from what he told the cops. Plus, though Joji told the police that Jomon died in a crude bomb attack, he should have realised that the post-mortem analysis would have revealed the air-gun pellets in Jomon's neck. Jomon's son, who knew Joji has an air-gun, would have joined the dots, which is exactly what happened.

Not just that, Jomon even goes on to cross his only silent supporter, Bincy, who turns his back on him when the cards fell. He thought her wimpy husband would fall for his blackmailing, but the man, maybe fearing his own life from Joji's greed, stood his ground, thus leaving Joji with no other option but to end his life. Fahadh Faasil Birthday Special: From Being Called ‘Wooden’ to Being Hailed as Best in Business, Recapping the Spell-Binding Journey of the National Award Winner.

Like I mentioned before, Joji lacks the wits to talk himself out of a situation, unless he has to search for it on Google. It was easier for him to search which is the softest part on his skull, rather than know how to lie better. Why, he couldn't even lie out of Jomon's questioning and ended up killing him (maybe Jomon's strangle-hold on Joji reminded the latter of how his father treated him). Joji also wants doesn't want to take responsibility for his actions, which is why he blamed the society for what he did, while borrowing his dead brother's quote ("Society is a f**ker!"). Told ya he is lazy!

In a nutshell, Joji is no Georgekutty from Drishyam saga, the latter who is well-prepared and is always one step ahead of his adversaries. Unlike Joji, Georgekutty genuinely cares for the people who loves, and what he does as a crime is to merely protect them. Georgekutty suffers from the guilt of what he does, so maybe that's why Luck was still in his favour. Which is never at all the case with Joji. Drishyam 2 Movie Review: Mohanlal’s Sequel to His Blockbuster Family Thriller Is Loaded With Pulpy Surprises.

What Will Happen to Him?

As the credits began, we realise that Joji's suicide attempt wasn't successful, and instead he is left paralysed. We see him lying in the hospital bed when the doctor (played by the director himself) brings in a DYSP, who asks Joji if he is ready to make a confession. What an immobile Joji needed to do was to blink his eyes and accept his crimes. But he doesn't. Even in his condition, Joji is stubborn enough to not own what he has done, though all evidence is now pointing against him. We are also not sure if Joji's paralysis is a permanent condition or not. Whatever the case is, Joji's future is bleak as he becomes a victim of Fate's whimsical sense of justice.

(The above story first appeared on LatestLY on Apr 07, 2021 11:03 PM IST. For more news and updates on politics, world, sports, entertainment and lifestyle, log on to our website latestly.com).