Mahaan is a Tamil crime drama that is written and directed by Karthik Subbaraj. The movie stars Vikram, Dhruv Vikram,Bobby Simha, Simran, Vani Bhojan, and Sananth. Mahaan is streaming on Amazon Prime Video. 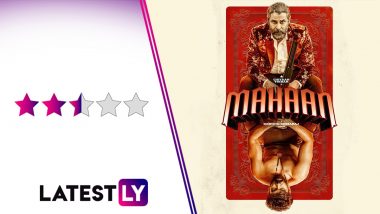 Mahaan Movie Review: Whenever we used to write about Karthik Subbaraj during his emergence as this hotshot filmmaker post Pizza and the terrific Jigarthanda (soon to be ruined in Bollywood reportedly as Bachchan Pandey), the epithet 'maverick' keeps being mentioned. His films always evoked excitement in me as a viewer. They were mainstream, and yet they were smartly narrated. Post Mercury though, Karthik seems to be losing his golden touch, wondering if he got afflicted by the superstar curse. His last film Jagame Thandhiram was a disappointment, and his latest Mahaan, sadly, doesn't belong to his greatest hits. Mahaan Song Naan Naan: This Peppy Track From Dhruv Vikram and Karthik Subbaraj’s Film Is a Perfect Tribute for Chiyaan Vikram.

Mahaan wants to be about the corruption of Gandhian ideals in a modern India that lacks a conviction to uphold them, as seen through the life of its protagonist 'Gandhi' Mahaan (Chiyaan Vikram) from 1968 to 2016. Brought up by his strict Gandhian father and later married to Nachi (Simran Bagga) who is also driven by Gandhian ideals, Mahaan is stifled in being the simple commerce teacher, who is both respected and also mocked at for his upbringing and his nickname.

So one day when his wife and son are out of town, Mahaan sees this as an opportunity to let himself loose, and that day, he meets Sathyavan (Bobby Simha), his former childhood friend who is now a bar owner. Certain events transpire that makes Mahaan ditch the path that his family wanted for him, and he soon turns Sathyavan's liquor business into an empire. In doing so, he strews far away from his wife and child, a mistake that will come back biting him years later.

An exciting aspect about Mahaan is the opportunity to see Chiyaan Vikram and his son Dhruv Vikram face each other on the screen for the very first time. As we are already familiar by now, Papa Vikram is a brilliant, hard-working actor - National-Award winner (when those awards had some significant value) - who can never churn out a bad performance. Son Vikram delivered a scintillating performance in his debut Adithya Varma, the Tamil remake of Arjun Reddy. When these two come face to face for the very first time in Mahaan during the interval block, there is a special kind of energy in that scene set during a festival. Dhruv shows he is no less a match in front of his father from thereon. At times, I believed Vikram took few steps back to let the son shine and shine, before he takes the charge back near the climax.

Needless to say, I was rooting to get to the scenes that involved Vikram and Dhruv, more so because it felt good to watch the actors try to outact each other. A highlight of that is a tense sequence at a hideout, that pits the vulnerable side of Vikram's performance to Dhruv's thunder-stealing act. Sananth, who plays Mahaan's godson, is also terrific in that scene, but you can't help but keep your eyes peeled on the father-son duo. What's even more interesting is that Karthik Subbaraj also included fight scenes between father and the son, which is somewhat of an unspoken taboo when it comes to our cinema. Jagame Thandhiram Movie Review: Dhanush’s Gangsta Swag Is Lost in Karthik Subbaraj’s Unapologetically Flawed Netflix Saga.

Anyway, so yes, I had fun watching Dhruv act up against Vikram, but I had no fun with the storyline wrapped around these two. The first half that shows the corruption of Mahaan and his rise as the boss in Tamil Nadu's liquor business walks down some very familiar paths that keeps invoking a sense of deja vu. Mahaan ditching his former ideals but not his nickname that gets stuck with him as he goes against the same ideals should have been an interesting idea. But the writing is merely packaging old wine in a new bottle. It doesn't help that Mahaan keeps reminding you of Mani Ratnam's Nayakan, only that here the protagonists enters the world of crime by his own choice, and not driven by circumstances. One scene I liked in the first half is the action sequence that begins with Mahaan beating him his assailants in a long take, while he works around the after-effects of the intoxicant that he has been given. Scenes like these show flashes of the director's brilliance, but the rest of the movie isn't consistent with that.

'Cos it takes Mahaan another half-an hour to get hold of my unwavering attention which happens during the interval block, when Dhruv makes his massy entry as Dada. Post interval, the flashback sequence montage showing what made Dada the man he is now maintained that interest level - not to mention, the hideout sequence - but then the ordinary writing once again brought down the excitement level. Mahaan: Dhruv Vikram Shares a Cool Squad Pic With Father Chiyaan Vikram, Co-Star Bobby Simha and Director Karthik Subbaraj.

The plotline very much felt inspired - from Nayagan to Chekka Chivantha Vaanam to strangely, even Bbuddah... Hoga Terra Baap, I can't keep ignoring the influences. In the third act, Subbaraj seeks his own film - Petta - for inspiration. I have said in my previous reviews, I don't mind the inspirations as long as the movie has something interesting to offer. But Mahaan doesn't exactly live up to those expectations. The over-stretched runtime doesn't help either.

Annoying me the most is how Mahaan uses the Gandhian ideologies to bring the conflict between the main characters in the movie, which wasn't vry fleshed out. I mean, yes the Father of the Nation was against consumption of alcohol, but his biggest weapons were the use of Truth and Non-violence. But the characters in the movie keep their Gandhian obsession stuck to ills of alcohol, and don't mind the violence meted out to stop it. One of the characters points this fallacy out later, but it felt more of an afterthought added rather than a genuine exploration of the ideas it wanted to pursue.

Still the second half felt better than the first half, because of Vikram-Dhruv combo scenes. Vikram's role allows him to be both the vanquisher and the vanquished, and considering how certain superstars are averse to show the fallible side of their characters, this is refreshing. He is fantastic in the scenes where Mahaan displays a pained conflict post Dada's entry, and displays mass and swag well enough when the movie demands him to do so. He does his best to make a very ordinary character look extraordinary.

Dhruv is bound to gain more fans with his performance here - it is fun to see him playing around with his father's thunder; often at times, making his act feel like seeing a montage of Vikram's greatest hits. Which is why I was very much exasperated that the movie don't live up to their combination.

Bobby Simha performs as per expectations, particularly incredible in the pier scene with Vikram in the third act. His character has less to do in the second half, though. Mahaan, however, like most of Subbaraj's films - save for Iraivi - don't have strong female characters, with Simran's Nachi coming out a thinly written one. The actress is also equipped with a bad wig in the second half. Santosh Narayanan's music is a strong highlight for Mahaan.

- Most of their Combo Scenes

Watch Mahaan to see Vikram and son Dhruv Vikram light up their combo scenes with their combustible acting energy, and then regret those scenes are not placed in a better movie. Mahaan is streaming on Amazon Prime Video.

(The above story first appeared on LatestLY on Feb 10, 2022 12:01 AM IST. For more news and updates on politics, world, sports, entertainment and lifestyle, log on to our website latestly.com).