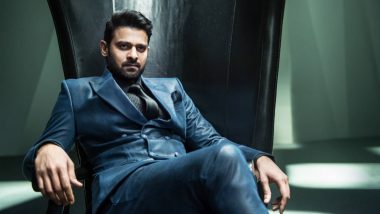 Telugu superstar Prabhas is on a roll. The actor who made his debut with Eeswar in 2002 is hugely loved by fans. However, it's SS Rajamouli's Baahubali, that made him a household name as the movie minted huge at the ticket window. Having said that, the good looking lad these days is busy signing pan-India projects. Not just one or two, Prabhas has in total four upcoming films in his kitty which are completely different from each other. With this, all we can say is that he is all set to rule the next few years too. Salaar: Prabhas Makes Yet Another Announcement, Teams Up with KGF Director Prashanth Neel for an Actioner.

On December 2, the actor announced one more movie with KGF filmmaker making his admirers go gaga over the same. Well, from Radhe Shyam with Pooja Hegde, an untitled with Bollywood diva Deepika Padukone to Saalar, let's take a look at what his upcoming filmography looks like. Amitabh Bachchan In Prabhas 21! Nag Ashwin Shares About Big B’s Role In The Upcoming Magnum Opus.

Prabhas' most hyped project is this one with Bhushan Kumar's T Series. Helmed by Tanhaji fame, Om Raut, Adipurush is said to be based on the epic tale of Ramayana where Prabhas plays Lord Ram, Saif Ali Khan is the Ravan and Kriti Sanon is Sita. The film is set to release on August 11, 2022. Adipurush: Kriti Sanon to Play the Role of Sita in Prabhas and Saif Ali Khan’s Magnum Opus?

Up next, we have Prabhas' next with Pooja Hegde. This one is said to be a pretty love story, in the making. While certain reports suggest that Pooja Hegde will play a double role in RS, there's no official confirmation on it yet. Beats of Radhe Shyam: First Motion Poster of Prabhas' Next to Release on His Birthday!

Nag Ashwin's Next With Deepika Padukone and Amitabh Bachchan

Yet to be titled film by Nag Asshwin will see Prabhas opposite Bollywood actress Deepika Padukone. Ahead, the makers also announced that megastar Amitabh Bachchan will be part of this project. The casting looks amazing!

This is the most recent announcement made by Prabhas where he has collaborated with KGF fame director Prashanth Neel. The first poster of the movie sees the actor in a gritty avatar and has blockbuster written all over it. The shooting of the film starts in January 2021.

With so many movies in his kitty, looks like Prabhas is all set to entertain the audience. The fact that everyone loves the Telugu stars, there is no doubt that his films will surely make the cash register ringing. Here's looking forward to more such exciting announcements. Stay tuned!

(The above story first appeared on LatestLY on Dec 02, 2020 06:14 PM IST. For more news and updates on politics, world, sports, entertainment and lifestyle, log on to our website latestly.com).