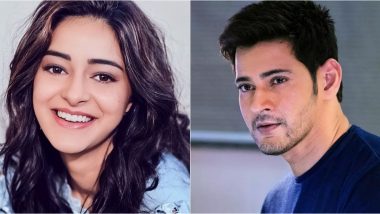 Ananya Panday, who made her Bollywood debut with Student of the Year 2, is all set to make her debut in South Cinema opposite Vijay Deverakonda with the film Fighter. It would be a pan-India release and fans are pretty excited to see this refreshing pair on the big screen. And now the buzz is rife that Ananya would be sharing screen space with Tollywood hunk Mahesh Babu in the film Sarkaru Vaari Paata. Sarkaru Vaari Paata: Here’s What Mahesh Babu Has to Say about the Release of His Upcoming Telugu Film!

Sarkaru Vaari Paata is directed by Parasuram and will be produced under the banners of GMB Entertainment, Mythri Movie Makers and 14 Reels Plus. According to a report in India Today, Ananya Panday has been approached to play the second leading lady in the upcoming flick. The report cites that the film’s director had recently narrated the script to her over a tele-call and Ananya is reportedly impressed with her role. However, the reports of the same are yet to be made official. Sarkaru Vaari Paata: Mahesh Babu Announces The Title Of His Film With Director Parasuram With This Intriguing Poster!

Sarkaru Vaari Paata will feature Keerthy Suresh as the female lead. This film is touted to be a mass entertainer and after seeing Mahesh Babu’s first look, fans were pretty excited. Owing to the ongoing global crisis, the shooting of the film is yet to start. The makers are planning to start it all by the end of this year.

(The above story first appeared on LatestLY on Aug 06, 2020 02:27 PM IST. For more news and updates on politics, world, sports, entertainment and lifestyle, log on to our website latestly.com).