Sunny is a Malayalam drama film that is written and directed by Ranjith Shankar. The movie stars Jayasurya in the lead, and it's mostly a one man act. Shritha Sivadas has a cameo, while Innocent, Aju Varghese, Vijayaraghavan, Sshivada Nair, Siddique, Mamta Mohandas have lent their voices. Sunny is streaming on Amazon Prime Video. 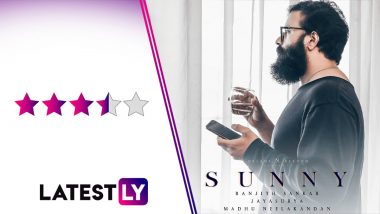 Sunny Movie Review: After Joji, Wolf and Aarkariyaam, yet another Malayalam film sets itself in the COVID-19 era. Ranjith Sankar teams up with his favourite actor, Jayasurya (both also producers), in Sunny, a movie that allows them to display why they are such a lethal combo. Just like Dileesh Pothan and Fahadh Faasil. Sunny is a one-man show, with Jayasurya in a supremely sublime form as its troubled and broken protagonist. Sunny Teaser: Jayasurya Plays a Lost Musician Seeking Inspiration and Peace to Bounce Back.

Interestingly, before I go into my review, let me remind you that one of the first Malayalam films to hit the OTT platforms during the lockdown period was Sufiyum Sujathayum on Amazon Prime Video. Although I had mixed feelings about the movie, it featured an excellent performance from Jayasurya, who also was incredible in Vellam.

Returning to Sunny, Jayasurya plays the titular character who has returned from the Gulf, after suffering losses in his business. On his arrival in Kerala, he burns his new passport and then goes to stay in a suite in Grand Hyatt.

However, despite staying in the same room as AR Rahman with luxury amenities (the fact that his cab driver points is a privilege only to a few), Sunny is a broken man. He is going through a divorce, he is heavy burden and contemplates suicide, which is why he wants to live his last days king-size.

India hasn't still recovered from the pandemic, although things now doesn't seem as bad as what it was a couple of months. The entire 2020 was a painful, fearful and a confused period for many, so my feelings for Sunny, a film that reminds how claustrophobic the solitude of quarantine is, are quite ambivalent. Sunny is a very captivating, touching film, empowered by its leading man's performance. But it also is harrowing at times, and if someone has gone through a bad mental state during the period, and Sunny could serve as a dire reminder of that period. Even though the focus is on one man, the film manages to touch upon themes of depression, unemployment, losses of lives, and the management of the crisis in the state the film is set in.

Is Sunny a bleak film? At times, it is, especially when the protagonist goes through alcohol deprivation, or when the loneliness attacks him, or when he is forced to face the mistakes of his past that broke his marriage, and also the one that left him in a huge debt.  Sufiyum Sujatayum Movie Review: Mouna Ragam-Meets-Ennu Ninte Moideen in Aditi Rao Hydari and Jayasurya’s Film That Lacks the Brilliance of Neither!

But Sunny, written by the director, is also a hopeful film, shown through instances when Sunny gets to connect with others, either through phone conversations or across balconies with his top floor neighbour (Shritha Sivadas). The calls with his best friend (Aju Varghese), the police officer who regularly inquires his health (Vijayaraghavan) and the counsellor assigned to keep his spirits up (Innocent), and the chats with the neighbour - all play into pushing the story forward, and in helping Sunny not lose the dim hopes he has about life. In the process, he learns that there are things worth living for.

PS: As someone who has had quarantined in Kerala (twice at that), I can assure those viewers who haven't, that you do get calls from police station and from the counselling centre about how you are faring. Which wasn't my experience, when I returned to Mumbai.

Madhu Neelakandan's frames come as an asset, be it the tight closeups of Sunny suffering from nausea and withdrawal symptoms, or in the soft light in which he bathes a plant that Sunny comes in possession. The best parts are the conversation that Sunny has with the counsellor, or the balcony conversations, which reminds us that there would be times even strangers can leave a deep impact in your lives. Shankar's handling of Sunny trying to fight his depression with the help of these strangers is nothing less than moving. I only wish that there was a bit more exploration of Sunny getting in touch once again about his musical talents. Because the music is an absolutely pleasant to the ears!

Sunny is a platform for Jayasurya to display once again his mettle as a fine actor, and with no other actors to compete in the field (Only Shritha's face is partially shown), Jayasurya chomps on the scenery with so much dedication and devotion, easily able to break down the complexities of his broken character. Ranjith Sankar brings out the finest performances in him, and while it may not be as crowdpleasing as his act in Punyalan Agarbattis, this ranks among his best for sure. Considering this is his 100th film as an actor, his performance in Sunny is definitely worth that milestone. Jayasurya Birthday Special: 7 Memorable Times the Malayalam Actor Impressed Us With His Negative Portrayals.

Innocent, Siddique (as the snarky money-lender), Vijay Babu, Vijayaraghavan, Aju Varghese, Sshivada (as Sunny's ex-wife) all do their parts well, despite none of them making any physical appearance. The one issue I have is with Sritha. Nothing on the actress, but in her casting. In the credits scene, I saw that Shruti Ramachandran has dubbed for the actress. Considering that it is more of a voice-dependent role, wasn't it a better choice to cast an actress who could have lent her own voice? Like, for example, could have used Mamta Mohandas, who only had a brief voice-cameo as Sunny's doctor! Or why not cast the actress who dubbed for the character?

- An Emotional Resonant Narrative That Doesn't Let Go Of Hope

- Depressing to Watch At Times

Sunny is a total Jayasurya show, alright, but it is a touching emotional drama that is affecting in most parts. Not an easy watch at times, Sunny leaves an impact with its lead actor's powerful performance and its poignant final act. Sunny is streaming on Amazon Prime Video.

(The above story first appeared on LatestLY on Sep 23, 2021 12:16 AM IST. For more news and updates on politics, world, sports, entertainment and lifestyle, log on to our website latestly.com).