Hansika Motwani's 50th film Maha is helmed by U.R. Jameel. The film is produced under the banners of Etcetera Entertainment. 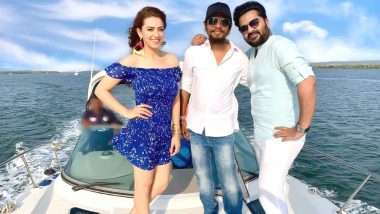 It was two months ago when the news leaked online that Hansika Motwani and her ex-boyfriend Silambarasan aka Simbu would be coming together for a film. And the movie which everyone is talking about is Maha, Hansika’s 50th film. This news left fans of these ex-flames excited and besides professional update, speculations were rife that the two are going to give their relationship another shot. While fans have been waiting to catch a glimpse of the duo, there’s a picture and a video doing rounds of social media. The video featuring Simbu has been leaked from the sets of Maha. Ex-Flames Hansika Motwani and Simbu to Work Together in UR Jameel’s Maha?

Maha is an upcoming Tamil film directed by U.R. Jameel. Produced under the banners of Etcetera Entertainment, this film also features Srikanth in the lead roles. According to reports, Silambarasan would be doing a special number in this film. About it, Hansika Motwani had tweeted, “Since the buzz is crazy and the news is leaked out way before time. Me and #STR are back in #MAHA”. The pictures that are doing rounds shows Hansika and Simbu along with the director and it is reportedly from a shooting spot. The video that has leaked online shows Simbu from the sets of the film. Hansika Motwani and Simbu to Get Married? Fans Speculate Wedding Between the Exes.

Video of Silambarasan from the sets of Maha

Ace music composer Ghibran has been roped in to compose the music of Maha. The makers are yet to announce the film’s release date. Stay tuned for further updates!

(The above story first appeared on LatestLY on May 27, 2019 12:50 PM IST. For more news and updates on politics, world, sports, entertainment and lifestyle, log on to our website latestly.com).