Hansika Motwani and Simbu to Get Married? Fans Speculate Wedding Between the Exes

Maha is Hansika Motwani's 50th film, directed by U.R. Jameel. Silambarasan will be essaying a pivotal role in it. 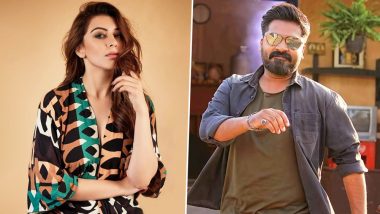 Before the makers of Maha or the film’s lead actress Hansika Motwani could make an official announcement about Silambarasan’s cameo in the film, the news was leaked. And it was yesterday (March 6) when Hansika confirmed that her ex-boyfriend Silambarasan aka Simbu is going to make a special appearance in Maha. The young actress took to Twitter and wrote, “Since the buzz is crazy and the news is leaked out way before time. Me and #STR are back in #MAHA”. Fans have gone berserk ever since the actress has confirmed the news. Ex-Flames Hansika Motwani and Simbu to Work Together in UR Jameel’s Maha?

Hansika Motwani and Simbu dated for few years and they even confirmed about it on Twitter. But due to certain serious differences, the duo called off their relationship. Now ever since Hansika has announced that Simbu is going to be a part of her film, fans are happy to see them reunite. In fact some are even speculating that the couple might give their relationship another shot. There are few who are even saying that Hansika and Simbu have plans to tie the knot. The comments posted by Hansika and Simbu’s fans must be read. Pudhupettai Stars Dhanush and Sneha to Reunite in Durai Senthilkumar’s Next?

Take a look at some of the comments fans have posted:

Dream combo is back

Hot news is that, both are in love and planned to get married soon.

Very very happy all best to both for marriage soon

Maha is a thriller, directed by U.R. Jameel. This will be Hansika Motwani’s 50th film and that too as a lead actress. While this yet-to-be-released film has already grabbed attention and fans looking forward to see the exes onscreen, let's see how the film performs at the box office.

(The above story first appeared on LatestLY on Mar 07, 2019 03:55 PM IST. For more news and updates on politics, world, sports, entertainment and lifestyle, log on to our website latestly.com).