Before making it big in Bollywood with films like Kai Po Che, Sultan, Sarkar 3, Gold to name a few, Amit Sadh had started his acting career by doing a TV serial that was titled Kyu Hota Hai Pyarrr (2002). Watch! 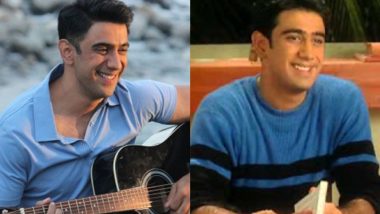 It ain’t easy to make a mark in showbiz without blood relation or a godfather, but then there are few actors who have proved how pure dedication and hard work can open many doors that lead to glory. One such actor is Amit Sadh, who has been impressing one and all with his brilliant performances. However, his journey into the filmy space was not a cakewalk. As before making it big in Bollywood with films like Kai Po Che, Sultan, Sarkar 3, Gold and more, he had started his acting career by doing a TV serial titled Kyu Hota Hai Pyarrr (2002). Amit Sadh Quits Social Media, Requests All His Fans To Take Care of Themselves (View Post).

Birthday boy Amit Sadh’s first-ever role was in KHHP in which he played the role of lead actor named Aditya. This particular daily soap was produced by actress Neena Gupta. In the show, he was starred opposite Ravi Bubber where the premise was a teenage college drama with twists. Here’s a glimpse of Sadh from Kyu Hota Hai Pyarrr. Amit Sadh on the Outsider-Insider Debate: We Should Devote More Time for Debating on Other Important Topics.

Wasn’t it a revelation for you’ll? As not all know that Sadh had debuted with a Star Plus serial. Meanwhile, the actor was last seen on screen in Yaara, Breathe: Into The Shadows, Jeet Ki Zidd. He also has gone off social media from quite a long time owing to the pandemic situation in India. Happy birthday, Amit Sadh. Stay tuned!

(The above story first appeared on LatestLY on Jun 05, 2021 08:10 AM IST. For more news and updates on politics, world, sports, entertainment and lifestyle, log on to our website latestly.com).