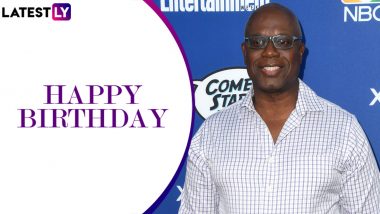 Andre Braugher is easily one of the most talented actors on Television. Be it his performance in the police drama series Homicide: Life on the Street or the current favourite Brooklyn Nine-Nine, the actor has always managed to leave a mark with his performance. The actor currently is famous for essaying the role of Captain Raymond Holt for Brooklyn Nine-Nine that stars other talented actors such as Andy Samberg, Melissa Fumero, Chelsea Peretti and Terry Crews. Braugher has also starred in some powerful supporting roles in films such as Primal Fear (1996), City of Angels (1998), Frequency (2000), Poseidon (2006), The Mist (2007) among others. Brooklyn Nine-Nine Will Scrap Four of its New Episodes After George Floyd’s Death, Confirms Actor Terry Crews.

The actor has also been a recipient of prestigious accolades and has bagged several nominations. Braugher has received two Primetime Emmy Awards, from ten nominations, and two Golden Globe Award nominations. As the actor celebrates his birthday on July 1, we look at his best moments on Brooklyn Nine-Nine. His character Captain Holt is sassy and his savage responses have surely won you ever. Here's looking at Braugher's best moments on the show.

There's quite none like Captain Raymond Holt when it comes giving a straight-face, sassy talk. Who can say, "I am good at (small pause) emotion" like him? or teach us how to say "I'm sorry" but in the most sincere way. Learn a thing or two from Captain Holt here because when he gets talking, we ought to listen!

When Captain Holt Becomes 'Raymond in the Kangol'

It's a rare occasion seeing Captain Holt let loose but when he does, it is unbelievably fun. When Raymond Holt decides to drop his 'Captain' hat and becomes 'Raymond in the Kangol', it is super exciting. Holt does know how to have fun and when he does get into the groove, there's no one like him.

We all need to learn how to give strong comebacks like Captain Holt. Every encounter between Holt and Madeline Wuntch is a lesson for best insults. Wish we could all get to say, "You're Wuntch Meat" as good as Andre Braugher does in the show.

Captain Holt is the King of One-Liners

Imagine saying, "Now Put on a Smile Porkchop" with as much sass as Captain Holt does. He's the best when it comes to one-liners on the show and we bet some of your favourites include, "I Birthed Her", "It's Time to Make Daddy Proud" and "Hello Sexerella" among others. Chelsea Peretti Exits Brooklyn Nine Nine and We Feel Like the Human Embodiment of the Heartbreak Emoji.

There's a reason why we love the character of Captain Raymond Holt so much and that's because Andre Braugher plays it so bloody well. We can't imagine anyone else playing this character for sure. Tell us your favourite Captain Holt moment from the show.

(The above story first appeared on LatestLY on Jul 01, 2020 10:20 AM IST. For more news and updates on politics, world, sports, entertainment and lifestyle, log on to our website latestly.com).