Bigg Boss 14: Salman Khan Loses His Calm and Blasts at Rubina Diliak for Not Doing the Task, Asks Her to Leave the Show 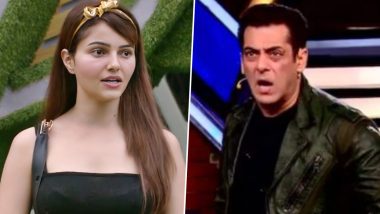 Irked by the attitude of actress Rubina Diliak, superstar Salman Khan will be seen asking her to leave the house in an upcoming episode. In the promo, it is seen that the contestants are given a task to perform by Bigg Boss, which Rubina refuses to participate, saying it is against her self-respect. "Main iss prakriya ka part nahi hoon. I am not a bin of garbage. Bigg Boss 14 Weekend Ka Vaar Synopsis: Rubina Dilaik and Salman Khan at Odds, This Weekend’s Elimination In the Hands Of Freshers

Ab hamare ghar ke mukhya bol rahe hai ki tumhaare dimaag mein kachra hai. Mujhe uss cheez se problem hai. (I am not a part of this task. I am not a bin of garbage. Now the head of the house is saying that you have garbage in your brain. I have a problem with that)," she is seen saying in the clip. Later, Salman is seen reprimanding Rubina in the weekend episode. Bigg Boss 14 Weekend Ka Vaar Preview: Salman Khan Asks Rubina Dilaik to Pack Her Bags and Leave

"Rubina aapka point unacceptable hai. Bigg Boss ke rules se aapko aapatti hai. (Rubina, your point is unacceptable. You have problems with Bigg Boss rules)," Salman said, and asked her what is she doing on the show when she doesn't want to participate in the task. When Rubina asked if she can put her across her point, he said that she is wrong. Then, Rubina said that she found it insulting, to which Salman said, "Apmaan toh abhi tak hua he nahi tha. (Noone insulted anyone)"

Rubina told Salman that she didn't know she would be reprimanded for her point of view to which Salman replied that he is talking with respect. "Yeh galat hai aur yehi aapko bhaari padne wala hai. (You are wrong, and it will work against you)," he said. In the preview, he is also seen asking her to pack her bags and leave. It will be interesting to see if Rubina leaves the house, or the matter gets sorted.

(The above story first appeared on LatestLY on Oct 18, 2020 07:41 PM IST. For more news and updates on politics, world, sports, entertainment and lifestyle, log on to our website latestly.com).