Going by the preview of tonight's Weekend Ka Vaar with Salman Khan seems like the host will spare none. As he will slam Rahul Vaidya, Rubina Dilaik and Jasmin Bhasin for their wrongdoings. Read on. 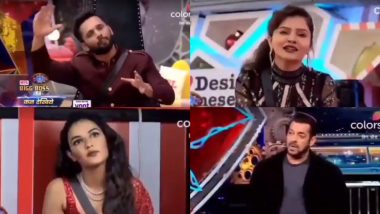 Bigg Boss 14 is turning out to be quite a controversial show. As after the toofani seniors left the house, the contestants this season are leaving no stone unturned to snatch the limelight. Right from Rahul Vaidya's nepotism remark for Jaan Kumar Sanu, Rubina Dilaik's personal attack on Pavitra Punia to Kavita Kaushik discussing Eijaz Khan's personal life with the red zone members, we've seen everything. Now, going by the preview of tonight's Weekend Ka Vaar with Salman Khan seems like the host will spare none. Bigg Boss 14 October 30 Episode - Eijaz Khan Breaks Down, Tabaadla Divides the House Into 2 Clear Groups - 5 Highlights From Tonight's Episode of BB14.

As per the precap, Salman first talks to singer Rahul and advices him to not use the word nepotism on the show. He also adds that if a father wants to help his son, how is that nepotism? Up next, we get see the Dabangg actor slamming Jasmin Bhasin for her not-needed behaviour in the World Tour task. Salman explains to her that it was a competitive game and Vaidya was not physically intimidating her. Bigg Boss 14 Preview: Eijaz Khan Breaks Down Into Tears; Rubina Dilaik Questions Pavitra Punia’s Character (Watch Video).

That's not it, as the superstar also reprimands Rubina Dilaik for adding fuel to the fire during the task when it was Jasmin vs Rahul. He also tells her that how she is making the life of other inmates in the house miserable. Well, tonight's WKV surely looks super entertaining. Stay tuned!

(The above story first appeared on LatestLY on Oct 31, 2020 10:04 AM IST. For more news and updates on politics, world, sports, entertainment and lifestyle, log on to our website latestly.com).