Talking about the game of Tina and Shalin Banot, whom she also referred as the 'dirtiest player', Sreejita did not shy away to say, "(It's) Very cheap, stupid, very fake and I am sure the audience is not that stupid." 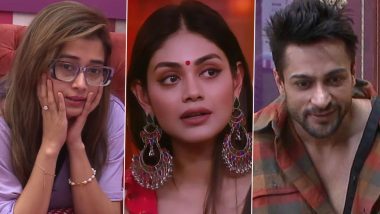 Sreejita De is the first contestant who has been evicted from the 16th season of Bigg Boss. The actress minces no words when she talks about her housemates Shalin Bhanot and Tina Datta by calling their game 'cheap, stupid and very fake.' A shocked Sreejita, who gained stardom with her work in television such as Uttaran, Nazar, Piya Rangrezz and Ladies Special, in a conversation with IANS said that she saw herself in the finals of the Colors show, hosted by Salman Khan. Bigg Boss 16: Sreejita De Becomes the First Contestant to Get Evicted from Salman Khan's Reality Show – Reports.

"I could see myself in the list of the finalists. That's what we discussed in the house... I didn't go there to come out so soon. I went there to have a beautiful experience till the end." She hopes to return as a wildcard but this time in 'attack mode' against Uttaran co-star and housemate Tina. She reveals: "Ofcourse, I would love to and I am getting a chance to watch what has happened behind my back in the show and in case Tina survives till then I would definitely like to take her case whenever I can."

"I would be bang on, in attack mode because what she is doing behind my back is not acceptable." Talking about the game of Tina and Shalin Banot, whom she also referred as the 'dirtiest player', Sreejita did not shy away to say, "(It's) Very cheap, stupid, very fake and I am sure the audience is not that stupid. They would understand that fakeness very soon." Bigg Boss 16: Sreejita De Calls Gori Nagori 'Standardless' in New Promo of the Reality Show (Watch Video).

"According to me the dirtiest player is Shalin." What about the blossoming love story between Tina and Shalin? "I would say HAHAHA nobody is so stupid to think they are genuinely falling for each other. It's just a game to create content and survive in the show because they both have realised that people are not liking them much and are not strong players in the house. So now they are playing this card. Just to survive in the house."

Sreejita has a soft spot for Abdu Rozik, the crowned cutest contestant of Bigg Boss 16. She shares the reason why Rozik, 20, is the strongest contestant in the show. "I would say Abdu because he's extremely cute and has a beautiful heart."

(The above story first appeared on LatestLY on Oct 16, 2022 09:28 AM IST. For more news and updates on politics, world, sports, entertainment and lifestyle, log on to our website latestly.com).