Amitabh Bachchan and Ayushmann Khurrana's Gulabo Sitabo becomes first Bollywood release to have an OTT release amid the ongoing lockdown. The film which was earlier scheduled for a theatrical release will now hit Amazon Prime on June 12. 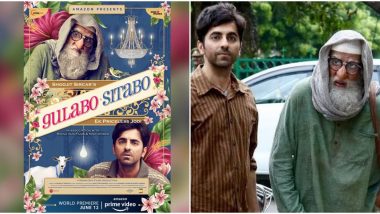 While we heard rumours of producers and filmmakers thinking of going the OTT way to release their ready projects, here comes an official confirmation from one of the many names we heard. Shoojit Sircar's next, Gulabo Sitabo with Ayushmann Khurrana and Amitabh Bachchan was ready for release but the ongoing coronavirus crisis prompted the makers to delay it by a couple of months. However, with scenario intensifying every day, no one really knows when things will come back to normal and it's wise for some short-budget movies like these to opt for an OTT release. Akshay Kumar's Laxmmi Bomb To Release On Disney+ Hotstar Instead Of Theatres? Fans Are Extremely Upset About It.

Gulabo Sitabo which was earlier scheduled for a theatrical release will now hit Amazon Prime on June 12. Speaking about their decision, Vijay Subramaniam, Director and Head, Content, Amazon Prime Video, India in his interaction with Deadline said, "At Amazon, we’re listening to our customers, and working backwards from there. Gulabo Sitabo is one of the most anticipated films of the year. We are happy to exclusively premiere Gulabo Sitabo on Prime Video. It is the first step in our endeavour to bring superior cinematic experiences to our customer’s doorstep."

Director Shoojit Sircar had earlier reacted to the rumours of his movie hitting an OTT platform directly by saying he has no qualms about it whatsoever. Gulabo Sitabo would make the platform's first and biggest local movie acquisition. This slice-of-life comedy will be available in 200 countries worldwide. Akshay Kumar's Laxmmi Bomb, Janhvi Kapoor's Gunjan Saxena, Sidharth Malhotra's Shershaah - All Films Rumoured to Release Straight on OTT Platforms and What's Their Real Status.

Akshay Kumar's Laxmmi Bomb is also expected to take the same route but official confirmation on the same is awaited.

(The above story first appeared on LatestLY on May 14, 2020 09:14 AM IST. For more news and updates on politics, world, sports, entertainment and lifestyle, log on to our website latestly.com).