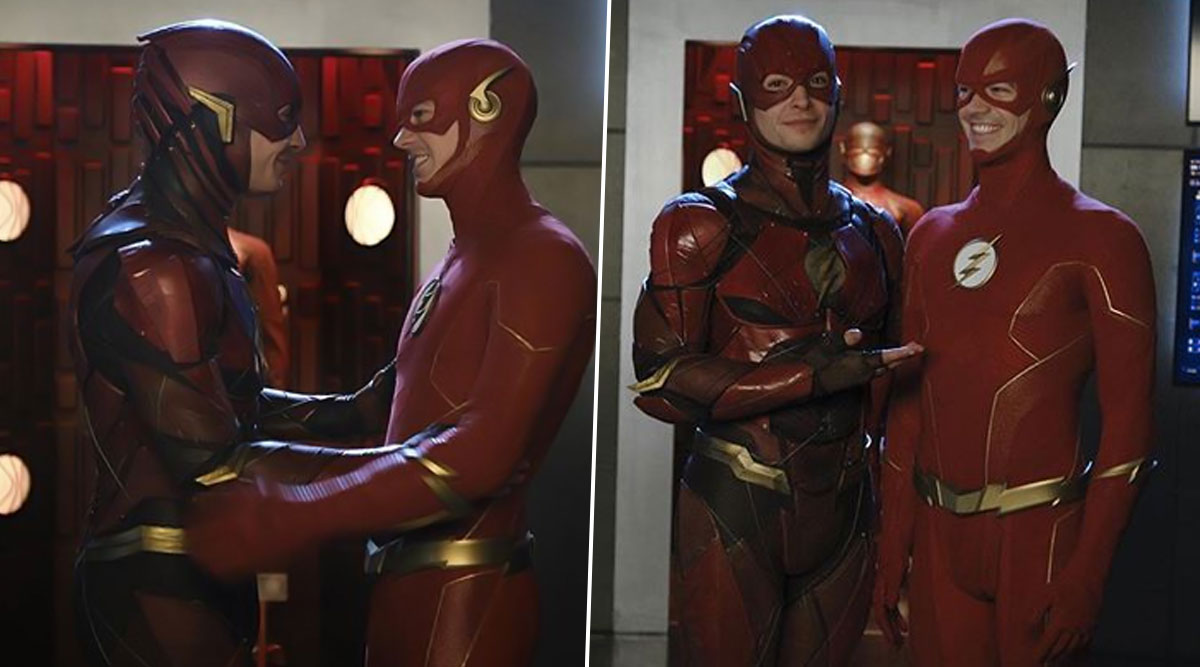 Crisis on Infinite Earths crossover event closed at Tuesday night on the CW with fans witnessing the first-ever crossover of a DC film and a Television series. Yes, herd it right! Netizens went absolutely berserk watching the episode finale with the appearance of another alternate Flash (Ezra Miller), whose cameo bought the Justice League and Arrowverse together. The showstopper scene came from Midway through the Arrow portion of the double-episode finale, Ezra Miller’s big-screen The Flash/Barry Allen appeared in a scene opposite Grant Gustin’s The Flash/Barry Allen. The scene took place at the STAR Labs, as Barry struggled with his re-entry into the Speed Force. After expressing puzzlement at the whole situation unfolding before them, movie Flash and TV Flash paused for a moment to admire one another’s suits and we have the Twitter reactions for you of this DC TV and Film universe merger. Dwayne Johnson Trains Hard For His Superhero Debut With DCEU’s Black Adam (View Pics)

A user shared a funny gif of men dancing together and wrote 'Barry and Kara after living on the same earth for 15 minutes' Another one calls the Grant Gustin and Ezra Miller face-to-face meet as The Flash 'Unnatural'. Out of thorough shock, one user tweeted 'This is some of the most insane shit I have ever seen.' While memes and reactions came flowing down to see the DC's TV and Film universe merging on the concept of the multi-verse. Every DC fan just loved the Flash vs Flash face-off admitting that they have never seen something like this before. Check netizens' reactions below. DCEU’s Release Roster Out! Here’s when The Batman, Super Pets, Black Adam Will Hit The Theaters.

This is some of the most insane shit I have ever seen. #CrisisOnInfiniteEarths pic.twitter.com/yZblyW1xVU

Barry and Kara after living on the same earth for 15 minutes #CrisisOnInfiniteEarths pic.twitter.com/XKoOUkJsLW

Biggest Crossover in the Multiverse? Of course Yes!

Dawg... #CrisisOnInfiniteEarths just pulled off the biggest crossover in the multiverse. pic.twitter.com/VqdGggI50i

I just finished #CrisisOnInfiniteEarths and... holy god...that was insane. Literally, so much was done that I never thought they would do! Ezra Miller! Gleek! The JLA! And best for last, PRIME EARTH!!!!! Congrats to everyone involved in the making of these 5 hours of television. pic.twitter.com/zUYW1Ybqfs

A Crossover As Simple As That

Ezra Miller coming into that scene with Grant Gustin #CrisisOnInfiniteEarthspic.twitter.com/BRfz5czPuH

A Valid Question to the Makers

Oh and also how the fuck they were able to get ezra miller #CrisisOnInfiniteEarths pic.twitter.com/zWP5UPSoUr

Nobody Saw It Coming

me 20 minutes ago: all crisis needs is beebo to appear

We gotta watch Oliver did twice in one crossover!? #CrisisOnInfiniteEarths pic.twitter.com/tjFekyHY51

Grant Gustin portrays Flash in DC's hit television series The Flash that came out in 2014 and is done with the five seasons so far. Grant Gustin as Flash has already made cameos in TV universe's Arrow, Supergirl, Legends of Tomorrow and Crisis on Infinite Earths. Moreover, The Arrowverse‘s five-part ‘Crisis on Infinite Earths’ crossover kicked off last month in episodes of Supergirl, Batwoman and The Flash, before concluding Tuesday on Arrow and DC’s Legends of Tomorrow. Ezra Miller played DC's fastest superhero Flash aka Barry in 2016’s Batman v Superman: Dawn of Justice and Suicide Squad and 2017’s Justice League. He also has a standalone Flash film under his belt which is slated for release in 2022. How did you like this Flash vs Flash crossover? Let us know in the comment section below.