Ghar Set Hai: Nilu Kohli To Feature in the Web Series, Talks About Depicting the Struggles of a Mother 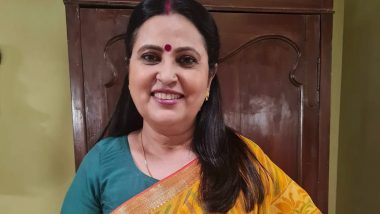 Actress Nilu Kohli, who was previously seen in the TV show Yeh Jhuki Jhuki Si Nazar talks about being part of the web series Ghar Set Hai directed by Gautam Parvi. She says: "I'm happy to shoot some amazing stories for the OTT release. And this is one among them. The story of the series highlights how a family in a city Raya near Meerut struggles, As the parents want their son to get married but on the other side the son is struggling with his job in Mumbai. OTT Releases of the Week: Millie Bobby Brown’s Stranger Things Season 4 Vol 2 on Netflix, Chris Pratt’s The Terminal List on Amazon Prime Video, Shraddha Srinath’s Dear Vikram on Voot Select and More.

"I'm playing the character of a mother to a boy which is quite interesting and amazingly written. My name in the show is Pratibha. The series is on the lines of Panchayat. The series was shot two years back and by God's grace finally it's going on floors." Nilu who has also starred in films such as Hindi Medium, Housefull 2, and Patiala House, says she is open to good content. Kartik Aaryan Rubbishes Reports of Replacing Akshay Kumar in Housefull Franchise After Bhool Bhulaiyaa 2 Success.

"My previous projects have been mostly positive ones. Though I started my acting career with grey shaded roles and received a lot of appreciation. I'm still open to playing grey shaded. All I want is good content and screen time for my role. As in my past I have done a lot of strong roles which my audience still talk about. And I feel so encouraged. They always recall my character from shows such as Na Bole Tum Na Maine Kuch Kaha, Shastri Sisters, Bhabhi, Naamkarann and Madhubala - Ek Ishq Ek Junoon."

(The above story first appeared on LatestLY on Jun 29, 2022 05:45 PM IST. For more news and updates on politics, world, sports, entertainment and lifestyle, log on to our website latestly.com).