Zaan Khan in his recent conversation revealed why his co-star Chahat Pandey decided to take her life and how her mother stopped her from taking such a drastic step. 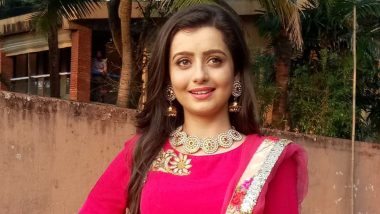 Actor Zaan Khan recently highlighted the plight of the cast and crew of TV show Hamari Bahu Silk who are patiently waiting for the makers to clear their dues. With no shootings happening amid the lockdown, some struggling actors and technicians are striving to meet their ends and are even thinking of taking some drastic steps. Chahat Pandey, the lead actress of  Hamari Bahu Silk show was among the unfortunate ones who tried to commit suicide in these tensed scenarios. Kriti Sanon Urges TV Show Producers to Clear Dues of Daily Wagers Amid COVID-19 Lockdown.

Zaan Khan in his conversation with Pinkvilla revealed why Chahat decided to take her life and how her mother stopped her from taking such a drastic step. "Chahat had actually attempted to commit suicide, but it was her mother who came to her rescue. Her mother stopped her from taking the drastic step. She has struggled a lot to be an actress, this money means a lot to her. It is the first time that she has earned such a big amount, but to her sheer bad luck, she is deprived of this also. She is the sole earning member in her family, her father is no more, and she has two small brothers and a mother to look after," he explained.

Reacting to their complaints, IFTPC Chairman, JD Majethia revealed there's not much they can do in this case. "Usually, in case of a dispute a producer or CINTAA approaches us and then we call our producer member and go through a joint dispute committee meeting. In this case, I doubt if producers are even our members," he said while referring to this case. Humari Bahu Silk Cast and Crew Haven't Been Paid 90% of Pending Dues, May Resort To Suicide, Says Report (Details Inside).

(The above story first appeared on LatestLY on May 19, 2020 07:06 PM IST. For more news and updates on politics, world, sports, entertainment and lifestyle, log on to our website latestly.com).