Let’s celebrate the guts that these five telly divas have by mentioning 5 of them. 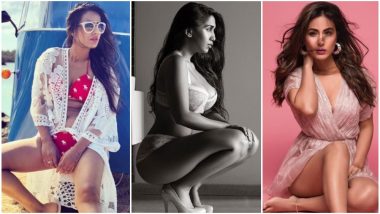 5 actresses who broke the internet with their hotness. (Photo Credits: Instagram)

Time and again, many actresses from the telly land have taken the bold step of uploading pictures that most of the B-Town people would be terribly afraid to otherwise. Yes, you read that right! Times have definitely changed. From Hina Khan, Erica Fernandes, Nia Sharma to Shama Sikander, several actresses have taken to social networking sites like Instagram amongst others, to treat fans to bold, sensuous and glamorous images of them and we can't stop gushing over their sexy, stunning pictures. Ditching the long-held norms of how a woman should present herself and how should she not, here are our five favourite bahus, who have slipped out of their traditional avatar and made cool style statements and bold choices. Isn't this is what we really admire about them all! Nia Sharma Stuns in Sexy Bralette in Latest Instagram Post – View Pic

It's a known fact that the small screen celebrities have taken the fashion world by storm with their sartorial experiments and fearless style sense. These beauties, who are social media sensations with an enviable fan following on Instagram, have mostly managed to put their best fashion foot forward and the pictures on their respective Instagram handles are proof of that. Well, here's a look at the small screen actors, who never fail to tease their fans with their sultry photos. Hina Khan’s Maldives Vacation Pictures Show You How to Travel in Style!

Let’s celebrate the guts that these divas from the telly world have by mentioning 5 of them:

Nia Sharma, who is currently seen in the TV show Ishq Main Marjawan, is one of the sexiest divas in the Television world. The actress, who is known to be a fashionista and loves to dress up, has never shown any qualms about flaunting her cleavage, toned abs, curves and long legs. The bombshell, who has time and again took the internet by storm by posting really bold pictures, have been trolled for it several times but that did not stop her and she went on to post more of them.

Gatsby night fun night #aslamchloekishaadi When the boys try to pick you up so that we can have an “interesting” picture and we all end up looking like goof balls 🤪😂 Congratulations once again @chloejferns . • • styled by: @shailjaanand outfit by: @_chisel__ jeweller by: @the_jewel_gallery

Erica, who is currently seen romancing Parth Samthaan in Ekta Kapoor's Kasautii Zindagii Kay 2, is quite a hottie off screen. Erica, who earlier never used to post hot pictures on social media, of lately, has been raising the Internet temperature with her stunning Instagram photos, surprising everyone with her new sexy avatar.

Hina Khan, who is winning hearts with her brilliant portrayal of the vamp character of Komolika in Ekta Kapoor's popular show Kasautii Zindagii Kay 2, never fails to impress her fans with her hot bikini pictures. From her gym pictures to her travel pictures, she never misses a chance to update herself well on social networking sites. Hina, who is quite a social media sensation, is ruling the roost on Instagram with her stunning photos as she always manages to steal the show by her hot figure and sexy avatar.

It's not about perfect. It's about effort and when you bring that effort every single day, that's where transformation happens. That's how change occurs....#abdilkisunn

Former television actress, Shama Sikander, who became a household name when she started off with the popular television show Sony TV’s Yeh Meri Life Hai, certainly knows how to garner some attention on social media! Her Instagram account is something to be opened with caution as her bold, hot and sensuous pictures surfaces on the internet almost every day. The actress has never shied away from sharing bold pictures of herself on her social media handles. Shama has a fabulous figure and one can’t deny it.

Anyone who followed Splitsvilla season 7 would distinctly remember this Goan beauty Scarlett M Rose, the contestant who managed to survive till the very end of the show without any constant connection. The curvy beauty, who is known for her bold looks and has created a storm on social media with her sultry snaps, is a stunner when it posing in front of the camera. Watch this space for further updates.

(The above story first appeared on LatestLY on Apr 07, 2019 08:30 AM IST. For more news and updates on politics, world, sports, entertainment and lifestyle, log on to our website latestly.com).