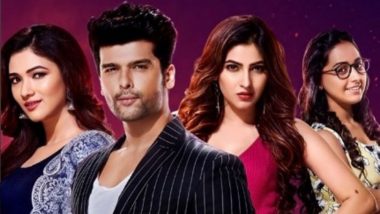 Yet another show by Ekta Kapoor that you must add to your 'binge watch' list. And it's even better because Kushal Tandon more charming than ever in this one. He plays the role of Rahul Nanda who works with Vikram Bedi, an acquaintance to the Kapoors. Karishma Sharma and Ridhima Pandit also keep you hooked to the screens. It's such a sweet yet complicated story. Karishma plays the role of Isha and Ridhima plays the role of Devina, the oldest sister. Payal Bhojwani plays the youngest sister, Sakshi, who also narrates the story. Mother Kapoor was the princess of Daulatganj, who left everything to marry the love of her life, who was not of the royal lineage and was also her dance teacher.

While Devina loves to hear her parents' love story every now and then, Isha thinks it was stupid of her mother to give up all the luxury life had given her for love. Sakshi is, well, indifferent. The Kapoors come to Mumbai to attend their mother's dead best friend's husband's 50th birthday celebrations. That's where the story takes off and only watch it if you have no other plans for the day. I had to stop watching after two episodes because I would be too tempted to give away spoilers in my review, which I don't want to do.

Kushal is such a charmer and you will totally love his character. Rahul Nanda might be a philanderer but he is also a good human being at heart, who cares about others. Though I would have personally loved to see the beard on him. It would have added to the charm of the character. But that's also because I personally prefer men with beards and a nice moustache. But moving on, Isha is quite straight-forward and street smart. She knows how to give it back and how to have the upper hand in conversations. Not to mention, Karishma's fashion game is on point even in the show.

Ridhima is convincing and very lovable as Devina. She is the responsible one in the family and also dreams of making it big in Mumbai just like Isha. She is the oldest sister and quite sensible, too. The episodes aren't too long, just like every other ALTBalaji show and they're crisp. Though it becomes easy to predict the plot or the next move as you are watching the episodes, you will be hooked on to it.

- A gripping and entertaining story

- The basic background of the Kapoor family is shown only through Mother and Father Kapoor's love story, which is quite unsettling. How does the family manage otherwise and how the girls grew up remains a mystery

It's a complicated love story but not something we haven't seen already. Most shows on ALTBalaji have managed to keep us entertained and break the stereotype about Ekta Kapoor shows, this one also adds to the list. It's gripping, emotional and entertaining. What do you think of it? Tell us in the comments below and stay tuned with us for more.

(The above story first appeared on LatestLY on Jul 30, 2018 05:16 PM IST. For more news and updates on politics, world, sports, entertainment and lifestyle, log on to our website latestly.com).