After Loki, 5 More MCU Characters We Are Waiting To See Come Out of Closet

Loki confirming his bisexuality in the recent episode of the Disney+Hotstar series has made us greedy. Now we want more MCU characters to own up to their sexuality in MCU's upcoming movies. We have picked five of our favourites as well. 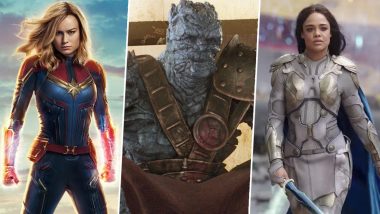 Marvel Cinematic Universe or MCU is often been bashed for limited representation of the LGBTQ+ in the movies. Despite being many characters in the comics being openly queer, the studios have been accused of 'straight-washing' them over the years. A token representation was done in Avengers: Endgame where Joe Russo, one of the directors, played a gay character who spoke about his partner he lost to Thanos snap in a support group. Now that Loki has confirmed being bisexual, the possibility of witnessing more MCU characters owning up to their sexuality in the coming movies is expected. We have put together five MCU characters who should now come out of the closet. Eternals Trailer: Angelina Jolie, Kumail Nanjiani, Salma Hayek – Who Plays Which Character In Chloe Zhao’s Marvel Film

It had to begin with Valkyrie because in Thor Love And Thunder she will finally address her sexual preferences. Tessa Thompson confirmed it on Twitter.

She’s bi. And yes, she cares very little about what men think of her. What a joy to play! https://t.co/d0LZKTHCfL

Although Okoye doesn't exist in comic books, she has the traits of Aneka, the general of the Dora Milaje from the comics World of Wakanda #1. As per the comics, Aneka was supposed to be in love with Ayo, who played Black Panther's bodyguard. A Vanity Fair article had revealed that there was a seemingly flirtatious scene between Ayo and Okoye in the final BP version but it was later removed. Marvel responded by saying that they didn't base the story on the World Of Wakanda so there's no romance to explore.

There has only been one movie on Captain Marvel so far. After a quite disappointing first film, Captain Marvel coming out as lesbian could give the series grab a lot more eyeballs than before. Phyla-Vell from the Comics had the same title and was romantically involved with Heather Douglas (Moondragon).

The Kronan warrior Korg, played by director Taika Waititi in Thor Ragnarok, is gay in the comic books. In The Incredible Hulks #619, he is dating a male gladiator named Hiroim who's yet to appear in the movies. It's time that happens. When Taika was asked about Korg's sexuality, he had said that he didn't consider the character gay when he played but there are chances he could be.

Eternals is doing what MCU should have done a long ago. It has the first openly gay superhero Phastos. He even has an onscreen kiss with his husband in the film Haaz Sleiman.

(The above story first appeared on LatestLY on Jun 23, 2021 10:26 PM IST. For more news and updates on politics, world, sports, entertainment and lifestyle, log on to our website latestly.com).