Here we learn about Marc’s tragic childhood and his strained relationship with his parents. The episode also does a great job at making people excited about the finale as we will finally get to see Marc in action, although it makes us question about what will happen to Steven. 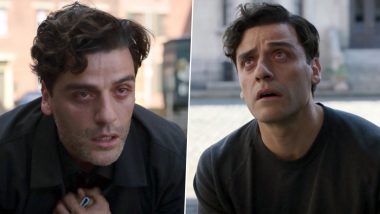 Episode five of Moon Knight was spectacular in its depiction of Marc Spector’s backstory. The series perfectly depicted his trauma and the origins of how he became Moon Knight and how he developed Steven’s personality. In a really heartbreaking episode, Moon Knight definitely has left us in a mess and with more questions in our head. With last week’s episode, we saw Marc end up in a Mental Asylum, only this week it’s revealed to be the afterlife. Moon Knight Episode 5: Fans React to the Emotional Backstory of Oscar Isaac's Marvel Superhero in His Disney+ Series (SPOILER ALERT).

The episode keeps on shifting from Marc and Steven being in the afterlife with the Egyptian Goddess Tawaret to exploring their backstory. Here we learn about Marc’s tragic childhood and his strained relationship with his parents. The episode also does a great job at making people excited about the finale as we will finally get to see Marc in action, although it makes us question about what will happen to Steven. With that being said, here is the ending for Moon Knight Episode 5 explained. Moon Knight Review: Oscar Isaac’s Unpredictable Show Keeps You Totally Hooked in MCU’s Most Distinct and Darkest Outing Yet (LatestLY Exclusive).

Tonight, keep up with the https://t.co/CjaAfg2XOL Episode 5 of Marvel Studios’ Original series on @DisneyPlus starting at midnight PT. pic.twitter.com/68VMYeOAyH

After Marc reveals to Steven that both of their lives started bleeding into each other’s after their mom’s death, Marc couldn’t go back to that life. Overrun with the guilt of his past, Marc gave total control over to Steven for the time being and let their continue until the last few days. Steven assured Marc that his brother’s death wasn’t on him, and he helps Marc make peace with it.

After reaching to the Gates of Osiris, Tawaret reveals that their souls haven’t been balanced yet and now the unbalanced souls of Duat will feed off them. Marc and Steven get into a brief skirmish with them. In an effort to help Marc, Steven joins the fight as well and is able to hold his own.

Unfortunately, Steven falls off the boat and turns into stone in front of Marc’s eyes who looks at him in horror. It’s revealed then that their souls have finally balanced and that the Gates of Osiris are finally open. The episode ends here.

What Will Happen to Steven Grant?

Now in Jeff Lemire’s run for Moon Knight, the Asylum was a mental jail created for Marc Spector so Khonshu could manipulate him even more. Now of course in that comic Marc walks away free from Khonshu’s hold and he even interacts with Steven and Jake Lockley in the flesh.

Whether it will be in the next episode itself or in some other series, that remains to be seen yet. If the showrunners are daring, then we can expect Steven to remain dead as well. This can hint to the fact that Steven no longer remains as a personality of Marc and we might not see him in the future again.

There is also the fact that the reveal of Jake Lockley still remains. We have seen him being hinted at in the show, and whether he will he show up here or not still remains to be seen as well.

Whatever it may be, we can expect our questions to be answered in the final episode of Moon Knight that streams next Wednesday at 12:30pm on Disney+ Hotstar.

(The above story first appeared on LatestLY on Apr 27, 2022 03:09 PM IST. For more news and updates on politics, world, sports, entertainment and lifestyle, log on to our website latestly.com).