Naagin 5 Lead Actor Sharad Malhotra Opens Up On Sushant Singh Rajput's Suicide and Depression, Feels One Must Refrain From Commenting Until the Whole Story Comes Out

Sushant's case attracted a lot of theories and until the Supreme Court granted a CBI investigation in the case, very few celebrities stood up for him. The Naagin 5 actor revealed that as a fraternity, it was crushing to see so less people standing up for justice for the late actor. 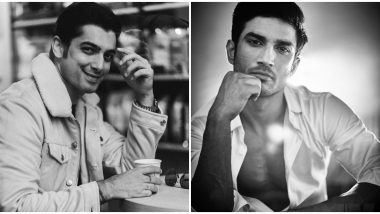 Actor Sushant Singh Rajput's suicide is currently under investigation by the CBI. The actor was found hanging at his Bandra home on June 14 and his death was quite the shock to one and all. Sushant's death also gave rise to the whole nepotism debate and his death has been in the media glare ever since. While a lot of television celebrities came in support for a detailed investigation in his case and Sharad Malhotra was one of them. Naagin 5: Sharad Malhotra To Play The Male Lead Opposite Hina Khan? (Deets Inside).

One of the first reasons that emerged for the reason behind Sushat's death was that the actor was suffering from depression, that led him to take the extreme step. However, having been one to suffer from depression himself, Sharad shared, "It’s very easy to pass judgment, or a remark, that he was suffering from depression, it’s easier said than done. Only he knew what he went through. And we need to understand that depression doesn’t happen overnight, it’s like a series of events. It kind of accumulates and has a reaction. Until we know what exactly happened to him let's not say anything and everything wrong about him." Naagin 5: Sharad Malhotra Assures Surbhi Chandna and Mohit Sehgal's Show Is Going to Be Grand.

Sushant's case attracted a lot of theories and until the Supreme Court granted a CBI investigation in the case, very few celebrities stood up for him. The Naagin 5 actor revealed that as a fraternity, it was crushing to see so less people standing up for justice for the late actor.

"It was very disturbing and saddening to see that very few people spoke about justice for Sushant. Even I did not want to say anything about Sushant, but when someone asked me, I would freely express my views and thoughts and emotions about him. So, I agree that initially, people did not want to comment, but when asked then they should have been vocal about it because we all need to know what exactly happened. I also want to mention that if you are standing up for him now, it should be with good intention and not with some hidden motive," he said.

"I want them to get closure. We all want to know what happened to the guy who was full of life. This can't be brushed under the carpet, the nation needs answers," concluded Sharad.

(The above story first appeared on LatestLY on Sep 01, 2020 07:08 PM IST. For more news and updates on politics, world, sports, entertainment and lifestyle, log on to our website latestly.com).